A satirical recap of the 2018 World Cup opener, between Russia and Saudi Arabia, brought to us by guest contributor and former ace Russian car repairman, Bogdan Kamensky

As all eyes in the world of media and sports are on the former Soviet Union as they host the 2018 World Cup, one must look no further than the first game of this time-honored contest to see the disrespect, deception and flagrant disregard for rules and regulations that this supposed “sovereign nation” has already abused.

In the opening ceremon alone, the display and use of military vehicles and aircraft by the former Soviet Union laid waste to 543 spectators, 12 players, 2 cameramen and a Boris Yeltzin borscht and vodka cart, killing their own citizens and players without batting an eyelash. This pales in comparison to the losses to the Saudi fans, team and portable shawarma and falafel carts. 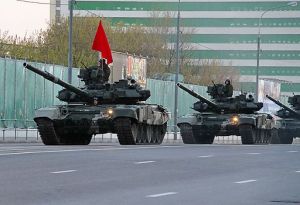 After the initial carnage, a full parade of regiments of all service members of the former Soviet Union, stomped their hob-nailed boots and mid-heeled pumps, smashing and grinding  the already questionable pitch into a quagmire and melange of mud, severed body parts, a tank and an armored personnel carrier that broke down. Westerners believe these people can’t even manufacture a working escalator, but if this opening ceremony isn’t a testimony to the supreme evil and disregard of human rights of the former Soviet Union, demonstrating their cunning abilities to rule the world, I DON’T KNOW WHAT IS!

Boris Badenoff, current dictator of the former Soviet Union, could be seen sitting, probably plotting ways to influence, intimidate, threaten and coerce his Saudi counterpart seated to his right. Smug grins and aggressive body language from Badenoff clearly showed the unhinged madman that resides within. President Hazim showed signs of sweat on the brow and upper lip, nervously biting his mustache as he bravely endured this life threatening encounter, smoking Tiparello’s and avoiding Badenoff’s evil and hypnotic ray.

It didn’t take long for the former Soviet Union team to score as their players had the maps to navigate the machine-gun nests, tank-traps and barbed-wire embankments without capture or death. As parachute cluster bombs exploded above the opposing bench, the second goal was quickly punched in by Dimitry Koznekov, who’s over-the-top celebration took the lives of the Saudi team trainer, a Saudi waterboy, and a Saudi service-dog named ‘Lucky’.

Former Soviet Union striker, Bednar Mishnikov could be seen on the sidelines, downing multiple shots of vodka while calling in attack helicopters to cripple and decimate the pesky and stubborn Saudi defensemen.  As if this wasn’t enough to demoralize and mess with the minds of the Saudi people, the ultimate atrocity to this lopsided and violent battle took place at the 64:23 mark when Badenoff could be seen talking to his watch and ordering the full scale bombing of Riyadh and the surrounding tri-county province.

After 3 hours of injury-time of the 6 hour contest, the final whistle blew, leaving the Saudi center, Ahmad Dasan and his one legged goalie, Hamdan Iskandar the only players left for the strategically liquidated Saudi team on the blood soaked, swampy pitch.  Their coach, Muhammed Logan had been replaced by Inan Momtaz who’s decapitation at mid-field after the final whistle showed the world that the former Soviet Union can do anything, from tampering in US elections with click-bait ads selling borscht, to hosting soccer games or even laughing off scaredy-cat Western media types, and their efforts to pass off fiction as facts.

What Fits Into Russia?