Dispatches from the Asylum received the following Christmas letter, obviously sent to us by mistake.   But it was so true, heartfelt and honest 😉 (and fictitious, of course) that we just had to share it.  Please enjoy this sparkling piece of Holiday depression! 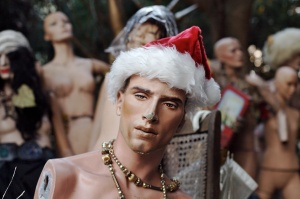 Well, it’s been a shitty year, as most of you know. With the election of Dumbo, the D’Klinkersty family hasn’t felt like doing much. Ever since November 8th, we haven’t done shit. I found this Christmas mannequin photo and substituted it for a real family photo because quite honestly, the mannequins look happier than our family.

We did go out to a couple of protests but they were pretty lame, being surrounded by other losers like ourselves, only these people hadn’t bathed in a few days and most hadn’t even voted. But we did get to participate in destroying a few cars and smashing some windows of business owners who not doubt got Trumped!  We need the electoral college to save us from this man!!

I told my daughter, Tangi, that he’s unfit to serve hors d’oeurves, much less the American people. I don’t know how we’re going to survive to next week, let alone the next 4 years with his insane tweets. His tweets are like a 3rd grader.  AND…he even has diplomats staying at his hotels and we are paying for 3 floors of special service in the Trump Tower, WTF!!!

I’ve been consoling my 15 year old son much of the time since the selection. I want to tell him that the last hope of this Republic is the ACLU.  But I can’t say that to him.  He thinks those letters stand for A College Lacrosse University.

I’ve been doing some studying since all this mess happened and I’m pretty sure that Federalist Paper #68 comes into play here. The Electoral College was set up to prevent someone exactly like Trump from ever becoming president.  WHAT THE HELL HAPPENED??? Twice the FBI had to alert the Trump campaign that their servers were connected directly to a Russian Bank.  And now Trump is bringing in a Secretary of State with deep Russian ties. What is truly horrifying is Wikileaks colluding with the KGB and the Trump campaign to tank the candidate for another party running for the Presidency.  How can I explain all this to my son?  He is nearly inconsolable. He made one youtube video – the one most of you saw with him crying and screaming into the camera. I thought it was effective.  Sadly, it only made his acne worse.

My half-brother asked me why can’t they arrest Trump now before he gets in office?  He colluded with Russia and said it to the press!   He’s obviously very corrupt and plans to destroy our country just like Putin did in Russia, he finished, with fresh tears on his face.  I had to remind him that Russia isn’t, in fact, destroyed but that doesn’t change the fact that this man must be put away before the inauguration.  He must be stopped now!

So, as you can see, the country is near death and everyone in the family is in mourning. Well, almost everyone. The family had to cut ties with Timothy, our oldest sibling in the family.  It had to be done. We had an intense family Skype meeting and we all agreed that just seeing Timothy made us think of Trump the Dump. We simply couldn’t allow those hostile feelings to be in our presence again. He said he didn’t vote for Trump BUT that if he had voted, he would have cast his vote for that piece of lice. Good luck, Timmy.  We won’t be missing you.

I’d like to end this holiday letter on a positive note, but it’s extremely difficult to get out of bed, let alone come up with any positive feelings right now.

But I should at least try to end this upbeat…so, Merry f-ing Xmas, everyone!