It’s another episode of ‘let’s just make shit up’, as dolts, shysters and assclowns show off their proclivity not just towards idiocy, but full-blown lunacy.

A reporter asked Karine Jean-Pierre if Biden’s statement on drilling is in conflict with his efforts to bring down gas prices.

Karine Jean-Pierre said Biden was being asked about “drilling in the Arctic.” – via thegatewaypundit.com

As Michael Shellenberger so poignantly noted, for months, President Joe Biden and members of his cabinet have claimed that they are no obstacle to expanded oil and gas production in the United States.

On June 21 Biden said, “This idea that they don’t have oil to drill and to bring up is simply not true. This piece of the Republicans talking about Biden shutting down fields is wrong.”

And on November 2, Energy Secretary Jennifer Granholm tweeted, “Disinfo about @POTUS’ energy agenda is being used to scare/mislead Americans while industry cashes in. The facts are clear: This Admin outpaced the previous Admin on crude oil production + oil/gas well approvals while also making historic investments in a clean energy transition.”

But tonight, Biden has effectively admitted that he, Energy Secretary Granholm, and others in his administration have been lying.

I have documented the lies Biden has told about his energy policy for the last five months. Others have as well. The Wall Street Journal reported in September that Biden had leased fewer acres of public land and waters offshore for oil and gas drilling than any other administration since World War II. 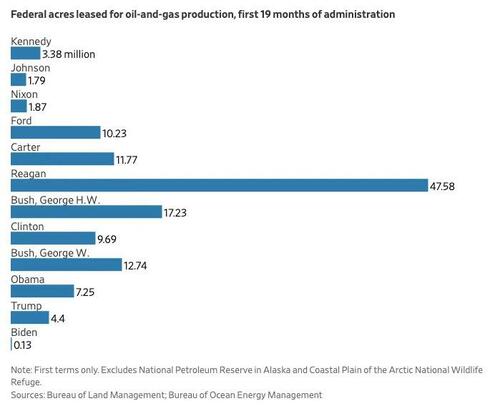 Granholm tweeted out a Politico article that noted that Biden administration regulators approved oil and gas wells more quickly than the Trump administration did during its first 21 months in office.

But the story was misleading because those approvals were entirely for drilling on private and state land, which are outside of the administration’s control, something Politico acknowledged 12 paragraphs into its article.

Biden’s quote, which is on par with his “outrageous” coal plant closure comments, hardly needs more commentary but we will note that it comes just days after the White House unveiled its “brilliantly cunning” plan of promising energy execs that it would buy all the oil they had to sell at $72 to refill the SPR that Biden single-handedly drained to crush US energy companies. Maybe the same oil execs will be just a little skeptical when it comes to anything that comes out of this old man’s mouth going forward.

And in more good news…

Are You Ready for the Coming U.S. Government Default? – by MN Gordon

The U.S. national debt has topped $31.2 trillion.  Tack on the debit of households, businesses, state and local governments, and financial institutions, and you’re looking at a total U.S. debt over $92.9 trillion.

Thankfully, all is well.