While healthcare wonks and other government and media busybodies, and even celebrities tell those who’ll listen to their dainty bullshit of what they should do for their health, everyone else seems to agree that these butter sticks are major arseholes.

Remember just a scant 12 months ago, when these same medical demons and dickheads were waxing on that if the original 15 days of lockdowns saved just one life, then all would be worth it?

Well, when it comes to the vials of battery acid manufactured by these hyena’s, who gives a fuck how many die from their antifreeze.

Nowhere is this more evident than the drumbeat to get hundreds of millions of Americans, and billions globally, to get “vaccinated” with an experimental mRNA cocktail that has yet to be borne out as effective through the rigors of full clinical trials. To the contrary, Pfizer, Biogen, Moderna, Astra Zeneca and Johnson & Johnson took numerous shortcuts, only submitted their nostrum to two phases of clinical trials instead of five and only studied their products on humans for three months instead of the 7-10 years it usually takes to gain FDA approval. These truncated timelines and dangerous circumvention of scientific procedures is the reason why the FDA only granted Emergency Use Authorization; they are admitting that these “vaccines” are not exhaustively vetted nor are they proven entirely effective against Covid-19. by Teodrose Fikremariam – via Ghionjournal.com

The tenth circle of Hell, because Dante couldn’t imagine anything beyond the nine circles he originally penned for the reason he didn’t live in this age of the demonically deranged.

The AstraZeneca Vaccine is NOT Safe.  None of them are – via richieallen.co.uk

Speaking this lunchtime, Johnson urged people to “keep coming forward” to have their vaccine despite significant and growing evidence that the AstraZeneca jab is causing serious harm. 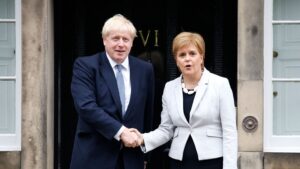 Today, Germany joined Ireland, The Netherlands, Denmark, Bulgaria, Norway, Italy, Estonia, Luxembourg and Iceland in suspending the AZ vaccine. Evidence is emerging that it is causing blood clotting and heart failure in recipients.

Bulgarian Health Minister Kostadin Angelov said that a 57 year-old woman died of heart failure less than a day after having the AZ jab.

Italy began a new lockdown today and German ICU doctors are warning that the country needs to return to lockdown because of a rise in cases and hospitalisations.

I don’t believe them. I think they are using the threat of more lockdowns to pressurise the public into taking the vaccines. I speculated weeks ago, that governments had already encountered resistance and that uptake was slowing down as the jabs were being offered to younger age groups.

News that the vaccines are killing people will do nothing to convince the doubters. The suits at AZ and Pfizer have told their lackeys in Academia to get on TV and warn of more lockdowns unless uptake is close to 90 per cent.

All of these vaccines have already proven to be potentially deadly. Tens of thousands of injuries have been reported through the UK government’s yellow card reporting system.

VAERS, the US monitoring system for vaccine injuries has been similarly overwhelmed. However, you may not know this, because the media has been told not to breathe a word of it.

But YOU are ready for their elixir…yeah?

“Are You Ready to be Fucked, Man?

It’s the sad tale, not just of this generation, but of all generations past, of the reaming we, the innocents take from these shysters…except maybe this time history has shown us that we should know better….for the eternal f**k comes to visit:

23 minutes of brilliance and forewarning:

Why You Should Question Vaccine Passports

During EP 364 of the Sunday Wire Radio Show, host Patrick Henningsen @21WIRE talked about the new globalized push for a “Vaccine Passport” – a project which is being driven by governments and non-state actors like the World Economic Forum, Bill and Melinda Gates Foundation, and Big Tech monopolies like Microsoft.

Despite offering no democratic oversight on this massive technocratic project, the European Union is attempting to implement this new digital “Green Pass” system – supposedly to act as an “immunity certificate” which travelers are expected to present as proof of their COVID vaccination. But this digital platform won’t stop there – it will extend to digital currency, social credit and access to the lost basic services – all part of the globalists’ “Great Reset.”

The implications are frightening and threaten to unwind both personal and national sovereignty in a way never seen before in human history. Get informed and seek out like-minded persons on this issue.

“My friend, you see how perishable are the riches of this world; there is nothing solid but virtue.”
― Voltaire

“Peace of Mind” Loggins and Messina