The Aztecs’ sacrifices pale in comparison to the slow-kill that government and media melon heads promote day-in and day-out upon millions of its brethren.

The innocents and apathetics turn on their TV each day, and with anuses starting to clench, bend over further for more lamentations to be drilled into them.

The air of death is in the air…and the psychopath’s are salivating:

Death Panel Ezekiel: “No Choice” But Mass Poverty and Death – via Another Day in the Empire – Kurt Nimmo

If several weeks of state-imposed house arrest and unemployment have maxed out your stress level, wait until you hear what the experts have in mind to “mitigate” a bad seasonal influenza.

Here is Dr. Ezekiel Emanuel, brother of Rahm, the former mayor Chicago and a Clintonite:

Realistically, COVID-19 will be here for the next 18 months or more. We will not be able to return to normalcy until we find a vaccine or effective medications,” e said. “I know that’s dreadful news to hear. How are people supposed to find work if this goes on in some form for a year and a half? Is all that economic pain worth trying to stop COVID-19? The truth is we have no choice.

You may remember Mr. Emanuel. He’s a “bioethicist” in favor of so-called death panels. He advocated denying medical assistance to old folks who are not “participating citizens,” that is to say sickly retired elders no longer working and paying mandatory financial tribute to the state and its corporate owners.

It probably shouldn’t be surprising a guy who believes dementia and elderly cancer patients must be left to die advocates a year and a half of a freeze-frame economy that will ultimately kill thousands, far more than a seasonal coronavirus.

The innocents look for a time machine to take them away from supreme butt-f**king from Beelzebub’s assistants – sadly, the psychopath’s have destroyed them.

A reporter asked Gov. Cuomo what he’d say to New Yorkers who want to go back to work because they’re running out of money, to which he replied, “economic hardship doesn’t equal death”

“You want to go to work? Go take a job as an essential worker” he added https://cbsn.ws/2wYbD51 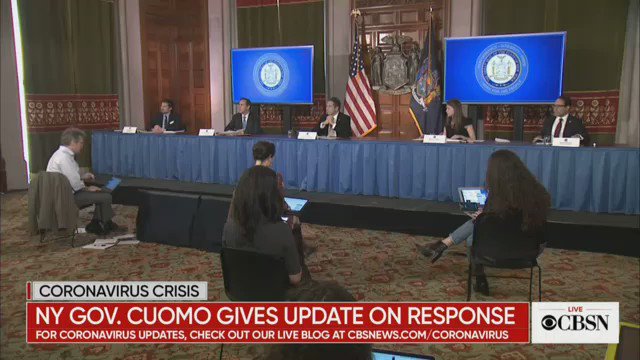 This sort of contempt for the folks who pay Cuomo’s handsome salary is a common trait shared by psychopathic control freaks. It’s fair to say the gov doesn’t really care about New Yorkers who will end up destitute. He is solely focused on what appears to be a nasty influenza and an endless iron-fisted lockdown, never mind the death toll from a nearly moribund economy will far outpace anything produced by COVID-19 (or any other virus).

The political class and technocrats like Ezekiel Emanuel still have time to build fortresses between themselves and an outraged and violent hoi polloi. Maybe that’s why the National Guard and Army have been mobilized. In six months, will every American know who Gen. Terrence J. O’Shaughnessy is?

Yes, shits like this really care about us, don’t they? And if you protest too much about your enslavement, they ban ‘gatherings’, like they have today in California.

As this writer of shitposting has been clamoring about for years…these psychopath’s DO…NOT…CARE…ABOUT…YOU!

Proof abounds of the daily kick in the crotch from these assholes. And yet, we continue to huddle in our homes, clutching pearls, and when they ‘allow’ us to venture out to germ-infested conglomerates to purchase shit where, apparently, the cornholio virus can’t abide, with masks donned, looking into the mirror before we leave our crib and ask…who the fuck are you, we’re confident that if we stay at least six feet away from our human brethren, we will be protected.

The waterfall of lies from the demons continue, crying out to the gods of shitf**kery to keep the lockdowns in place.

And why not…these shitards aren’t affected, but the innocents are:

Fewer than half of working Americans will have a paycheck in May as devastating coronavirus layoffs persist, economist says – via businessinsider.com

But there is a ‘choice’ to following this madness.

It’s a simple thing…backbone, courage and standing up for you and your loved ones.

How is it done? Glad you asked…here’s an example:

All of this came to a head this week when a video of Sara Walton Brady’s arrest went viral. Brady helped to organize a protest over the weekend in which moms would take their kids to play in the park — an act hardly comparable to Rosa Parks, but civilly disobedient nonetheless. Brady was arrested, according to police, because she refused to leave when police demanded the kids stop playing in the park.

The video caused outrage across the internet and manifested into a massive act of police accountability. After Brady’s arrest, dozens of protesters went to the home of the Meridian Police Department officer who arrested Brady. The protest was reportedly spearheaded by Ammon Bundy, who as TFTP reported last week, has been planning resistance to the lockdowns.

As the crowd grew larger at the officer’s home, his fellow cops helped guard him.

“There was a woman at a park with her children and she was arrested!” Bundy screams at the four or five cops standing in the driveway. “Completely inappropriate.”

The cops seemed receptive to the message and appeared to have an actual conversation with the protesters instead of simply ignoring them. This is a good thing.

Naturally, the left is calling the protest in front of the cop’s home, an act of extremism. The same outlet that supported protests when it fit their narrative, now refers to others as “extremists” for similarly flexing their rights. They also attempted to smear the woman who was arrested because she reportedly chooses to abstain from vaccination….the horror.

“The most dangerous man to any government is the man who is able to think things out for himself, without regard to the prevailing superstitions and taboos. Almost inevitably he comes to the conclusion that the government he lives under is dishonest, insane, and intolerable…” ― H.L. Mencken, Prejudices: Third Series

Personal notes from this shitposter:

They are unable to comprehend your offerings. They can’t, for whatever reasons, catch even a glimpse of your feelings – for they haven’t a clue of their own. They are steeped into believing the bullshit of the age.

You may want to share something profound…profound, at least to you. Your audience is absent. They have checked out.

The simplest of joys of life are slowly being extinguished. You talk with others, write or text them – they offer up trite shyte in exchange for what you feel, or think, or suffer from.

They are lost….but, just as you awoke…there is the hope that they will too.

Wolfgang Amadeus Mozart – Concerto for Piano and Orchestra No. 20, Romance

Photo by Jaromír Kavan on Unsplash