In an age where you aren’t considered a rational thinking person if you aren’t gloriously enraged at what some nutjob politician is either saying… or saying, since they don’t really do much of anything other than open their pie holes emitting gaseous clouds of toxic particles that is surely contributing to catastrophic climate change, you’re considered a  bit daft if you’re concerned about the toxicity of electromagnetic radiation, chemicals for illnesses found in pharmaceutical pills, geo-engineering of the weather, or any other corporate or government creation sold for our benefit, and their profits and control, of course.

Consider your own illnesses or diseases, of which you are probably suffering from given all the goo we are either inhaling, drinking, injecting into our bodies or eating. Whether their arrival is by air, by sea or by land – the goo is all about us.

Another’s illness we typically aren’t gloriously enraged about, but our own illnesses, now that gets our attention.  Most folks will head off for an appointment with the medical guru’s wearing white lab coats for wizardly advice and proclamations as to what you must do if you want to get better, rarely telling you that if you take what they recommend, well, there just might be side effects. But no worries, they have other pills for you to take to combat those side effects, and even more pills or procedures for you for the next round of side effects. The wonderfully profitable merry-go-round of keeping you a patient for life flourishes, making billions in profits for shareholders and CEO types, and leaving you with loose change to buy life’s necessities.

Some take their illnesses out on others, some on themselves, or in the case of the modern era, take to social media and vomit their mental enragement at strangers because they like this or that jackal from whatever political party.

And then some, albeit from ages past, took their illness and turned it on its head toward untold beauty. 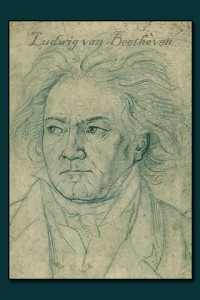 Beethoven died in 1827. But just two years previously, he was still composing, completely deaf, and also finding himself gifted with intestinal inflammation in April of 1825. Beethoven’s physician gave him strict orders to cut off all the good stuff, like wine, coffee and spices. In October of 1825, he was still sick, telling his doctor that he was weak, spitting out blood and that often times the blood was streaming out of his nose. Lovely stuff.  He eventually recovered and produced even more musical magnificence, this one in the form of his Opus 132, string quartet.

He even gave an inscription to the third movement of the quartet: “Heiliger Dankgesang eines Genesenen an die Gottheit, in der lydischen Tonart” (Song of Thanksgiving to the Deity from a convalescent in the Lydian mode).

This third movement is not what the casual lover of Beethoven’s music would expect, or even a seasoned lover of his music too. When I first listened to it years ago, I thought it might be any number of composers, but not Beethoven. It is so thoroughly different in conception and even in melody but it still does what almost every creation of Beethoven does…it grabs your soul and takes you to places of beauty, of melancholy, of suffering, of joy and praise you’ve never experienced before.

This is what a human, a profound human, gives to the world from the suffering they uniquely experience.

The sad sack of degenerates and demons of the political class, offer up words that inspire hatred, loathing, and a continuing of aggression towards any who don’t believe in the insanity of the day they’re advocating…whether it be left, right or anything other nonsense in between.

“Pain and suffering are always inevitable for a large intelligence and a deep heart.”
― Fyodor Dostoyevsky, Crime and Punishment

Photo credit: Beethoven – “Ipod wallpaper” by vidalia_11 is licensed under CC BY 2.0