As civilization gallops towards its destruction, hell-bent on offing itself for the profits of the few and guano-drenched psychopath’s of the modern era – it’s comforting to know that in the not too distant future, we, the unwashed masses, won’t have to go to the cattle round-up found at our local gym to sweat away a few pounds, won’t have to see a shrink to sweat away the perplexing issues of the modern era, like, how many followers do I have on Twitter today? No, no, no – our loving corporate/government will provide the way.

Life is series of problems, mostly given to us by corporate shysters with their whizz-bang shyte offerings that they niftily market, telling us our (their) problems will be solved if we but purchase their technicolor wonder of horseshit.

And what makes this all the more funny, but actually pathetically sad is that we fall for it all.

So, if you feel the need to sweat – not to worry, as Big Telecom and your loving government rolls out 5G – so that you can download modern day ugliness faster than barfing up a GMO-laced taco – blanketing your bodies with high levels of radiation that your sweat ducts can’t handle.

God, it’s so cool to be in on the ‘benefits’ of breaking technology:

But wait! There’s more fun and f**kery from these gangsters:

The USA is currently leading the way on 5G. At the June 2016 press conference where the Federal Communications Commission’s (FCC) head Tom Wheeler announced the opening up of low, mid and high spectrum’s. There was no mention of health effects whatsoever. But the dangers are real. 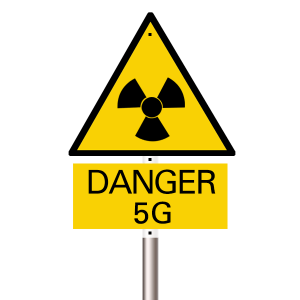 Let’s not also forget that in 2011 the World Health Organization (WHO) classified radio frequency radiation as a possible 2B carcinogen.

More recently the $25 million National Toxicology Program concluded that radio frequency radiation of the type currently used by cell phones can cause cancer. – via www.electricsense.com

The dump of geo-engineering of the weather that hardly a soul notices because they can’t take their gaze away from their dumb-phone long enough to look up into the skies to witness the goo of f**kery seeping into their lungs, their bodies, their brains – contributes as well. And yes, you guessed it – it’s all brought to you and your loved ones by your oh-so-caring government.

But don’t worry – breathe it all in and embrace it – for with it all, your political ideas will no longer matter. Identity politics won’t matter either. Whether you subscribe to gender identities – believe in Santa Claus, want to be a man today, a woman tomorrow or a goat the day after, won’t matter. All your pet peeves will be neatly turned to dust and whether you subscribe to the insanity of CNN, MSNBC or FOX or any other corporate media in between won’t matter. Your programming will be complete, your health destroyed, but at least you’ll be able to ride along in your self-driving car, with its own smart meter included – frantically pounding on your dumb phone, or instructing the self-driving car to get you to nearest medical facility in the hopes that they have a chemically-laced vaccine to save your life…the joke’s on you – they don’t.

And if you’re a bit into the “woo-woo” of the universe’s gifts, maybe believe that God, Mother Earth, or the committee of dolphins who created this wonder of Earth provided ways to protect ourselves from wifi, radiation, along with providing a bounty of other benefits – your inquisitiveness just might lead you to the following website – cosmicreality.net. I have no affiliation with them – providing their website, products offered and information as a means to explore ways to assist in the well-being of your body, mind and soul – if you so choose.

But be advised, there is nothing that will protect us from 5G – the military’s microwave weapon, nothing other than our efforts to stop this insanity.

“No one can do everything, but everyone can do something.” – Max Lucado

Denver swing dancers, Ceth Stifel and Dani Botello, doing their thing, to the La Pompe Jazz swing tune, “Jersey”. Shot in an old warehouse in the RINO district in Denver.