Just like the U.S., way back in 2013, repealed the propaganda ban, allowing government-made news to be spread among the unwashed as freely as their geo-engineering and other weather modification devices “gifts” to us each day, a case can be made that at some point in time during the past 20 years or so, our fascination and adoration of idiots wearing finely tailored suits has overtaken whatever amount of common sense we had, to the point where we actually believe that the guano spewing from their pie-holes is the right and proper way to go.

Sadly, many continue to listen to these psychopath’s, just as you would to your 80+ year old mum, whom you listen to out of love and respect, hearing the same story over and over and over again. Commendable actions on your part with your mum – utter insanity if the same patience and interest is given to the psychopath’s and shysters in finely tailored suits, reigning down their version of Hell on earth for everyone but them.

But even with your 80+ year old mum, who doesn’t believe in much of anything outside her specific worldview of a time of how life was when she was a young one and that all things then, should be all things now (which isn’t a bad idea) we give heed to nutjobs promoting absolute insanity, yet ignoring that which boils up from the pits of Gehenna.

As Media Freaks Over 159 Measles Cases, Thousand of Kids Sold as Sex Slave Out of Foster Care – via activistpost.com

Grim shyte, to be sure, but this is an example of the BS were fed, versus the real news kept from us.

I pound on regularly about the dangers of 5G.  It isn’t because I necessarily dislike technology (how else would you be reading this right now) but know in my head and heart (and researching extensively) that this newest technological goo will do us all in.

It won’t matter what new war Washington is dreaming of – it won’t matter what next chemical concoction of poisons to be delivered via a needle – for our health, of course, and to the financial benefit of the psychopath’s selling this f**kery, pawned upon the ignorant and apathetic.

If installed full force on every lightpole and trash can within sight – all of us might either be visiting the next life sooner than we anticipated, and if not, will be left to deal with physical and mental ailments that will send us of us to a point where we can’t get beyond the suffering we will endure.

Is there a way, a natural way, to combat this electronic goo of the modern era…Perhaps: 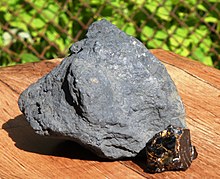 Shungite is a black, lustrous, non-crystalline mineraloid consisting of more than 98 weight percent of carbon. It was first described from a deposit near Shunga village, in Karelia, Russia, from where it gets its name. Shungite has been reported to contain trace amounts of fullerenes (0.0001 < 0.001%).[1][2]

Shungite has been used as a folk medical treatment since the early 18th century. Peter the Great set up Russia’s first spa in Karelia to make use of the water purifying properties of shungite, which he had himself experienced. He also instigated its use in providing purified water for the Russian army. The anti-bacterial properties of shungite have been confirmed by modern testing. via wikipedia.org

And if you might not believe in the “natural”, consider the absolute “f**kery that comes from demons, psychopath’s and non-humans wearing finely tailored suits – promoting the stench that only Gehenna can bring.

Or better yet, listen, each day, to what your mum says.  Yes, it can be painfully redundant, but as you afford your mum (or dad) to rant on about this and that – try to keep in the inner crevices of your mind, that this is what your soul is your hoping for during its final months – angels in human form, listening…just as we each individually hope for, as we take our dying breath – that angels are listening to us.