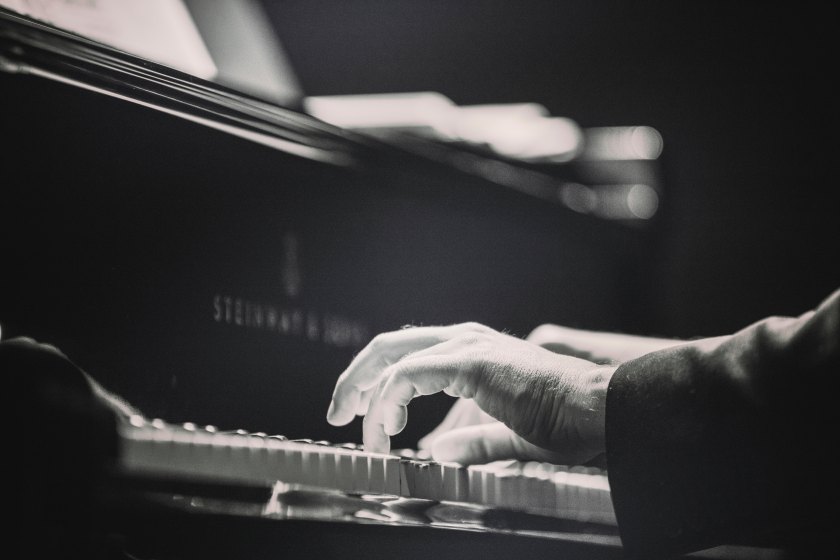 After the success of an experimental classical-jazz concert held with French-Canadian singer Eva Gauthier at Aeolian Hall (New York) on November 1, 1923, band leader Paul Whiteman decided to attempt something more ambitious.[2] He asked Gershwin to contribute a concerto-like piece for an all-jazz concert he would give in Aeolian Hall in February 1924. Whiteman became interested in featuring such an extended composition by Gershwin in the concert after he had collaborated with Gershwin in the Scandals of 1922, impressed by the original performance of the one-act opera Blue Monday, which was nevertheless a commercial failure. Gershwin declined on the grounds that, as there would certainly be need for revisions to the score, he would not have enough time to compose the new piece.[3]

Late on the evening of January 3, at the Ambassador Billiard Parlor at Broadway and 52nd Street in Manhattan, while George Gershwin and Buddy De Sylva were playing billiards, his brother Ira Gershwin was reading the January 4 edition of the New York Tribune.[3][4]An article entitled “What Is American Music?” about the Whiteman concert caught his attention, in which the final paragraph claimed that “George Gershwin is at work on a jazz concerto, Irving Berlin is writing a syncopated tone poem, and Victor Herbert is working on an American suite.”

In a phone call to Whiteman next morning, Gershwin was told that Whiteman’s rival Vincent Lopez was planning to steal the idea of his experimental concert and there was no time to lose.[5] Gershwin was finally persuaded to compose the piece.

Since there were only five weeks left, Gershwin hastily set about composing a piece, and on the train journey to Boston, the ideas of Rhapsody in Blue came to his mind. He told his first biographer Isaac Goldberg in 1931:

“It was on the train, with its steely rhythms, its rattle-ty bang, that is so often so stimulating to a composer – I frequently hear music in the very heart of the noise…. And there I suddenly heard, and even saw on paper – the complete construction of the Rhapsody, from beginning to end. No new themes came to me, but I worked on the thematic material already in my mind and tried to conceive the composition as a whole. I heard it as a sort of musical kaleidoscope of America, of our vast melting pot, of our unduplicated national pep, of our metropolitan madness. By the time I reached Boston I had a definite plot of the piece, as distinguished from its actual substance.”

Gershwin began his work on January 7 as dated on the original manuscript for two pianos.[2] The piece was titled “American Rhapsody” during composition. The title Rhapsody in Blue was suggested by Ira Gershwin after his visit to a gallery exhibition of James McNeill Whistler paintings, which bear titles such as Nocturne in Black and Gold: The Falling Rocket and Arrangement in Grey and Black (better known as Whistler’s Mother).[8] After a few weeks, Gershwin finished his composition and passed the score to Whiteman’s arranger Ferde Grofé, who orchestrated the piece, finishing it on February 4, only eight days before the premiere. via wikipedia.org