When I was 18 years old, 44 years ago, working as a cook in a local hospital, a white mustached, gruff-looking man, who was also a cook at the same hospital, 40 years older than me at the time, took a liking to me, for the only reason being that in a passing conversation one day, I made mention that I’d been taking piano lessons since I was 7 years old and was planning to study classical music in one form or another upon entering college. Upon hearing that, from that point, I was his “protege”.

With one’s first viewing of the man, one wouldn’t think that some old, worn-out looking cook at a hospital would light up upon hearing some young punk of an 18 year old loved classical music. But he did.

Ray was an old man that most would go out of their way to avoid. He was loud when he spoke. He looked ragged and disheveled most of the time. He smoked Camel unfiltered cigarettes when even a whiff of a break presented itself. He kept to himself exclusively, unless I was working the same shift he did.

He had little time for chit chat…except with me. Every chance he had, he would motion for me to meet him out back for a quick smoke.

There, he would puff away on his Camel unfiltered, telling me stories about playing the clarinet back in the twenties and thirties for big bands that I knew a sliver about back then, but have come to appreciate now.

One looked at the man and never, in a million years, would one think that his arthritic hands would have played clarinet in big bands. He looked more like the barkeep who would throw out questionable characters at the local saloon than a man who was talented enough to land gigs playing in big bands back in the twenties and thirties. 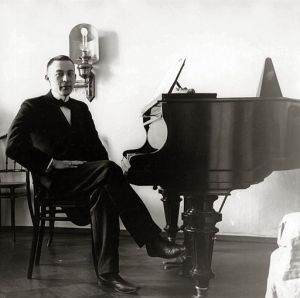 He kept at me. Kept talking to me about classical and jazz music. Kept sharing stories of his experiences with the greats. He even kept at me enough to convince me to purchase season tickets to the symphony.

Sometimes we would meet at the symphony on performance night, other times we’d meet and take the bus downtown…and other times I would pick him up from the basement apartment he lived in and we’d travel downtown. No matter the avenue of travel, I would be treated to story after story of his “time”. Sadly, I don’t remember the specific’s of them all, but do remember I simply kept my mouth shut and listened.

But the story that has stuck with me all these years was the following:

While we were out in the back on the loading docks during a break, having a cigarette, he told me that he had met Rachmaninov one evening when he was a young clarinet player, playing in Benny Goodman’s band – I don’t remember the year, only remember hearing the name “Benny Goodman” and, of course, the name of Rachmaninov.

I do remember him relating that it was in New York. It was after a concert that Rachmaninov had performed, and due to serendipity or some other fate-type of thing, Ray found himself face-to-face with the classical composing genius on some street in New York.

He told me that he offered his hand to Rachmaninov, who simply stated: “I’m sorry, but Rachmaninov does not shake hands”.

I have no idea if the story was true, but judging from the man, the cook, the old clarinet player who only wanted to impart to me his love and appreciation of classical and jazz music, hoping that I might in some small way carry it all on, I believe the story to be true.

Maybe the only lesson here is to never shun, cast aside or discount the stories of white mustached men (or women) and what they have to share with us of their days long since passed.

After all, we never know of the hands we’ve shaken who have never shaken the hands of others.

For Ray, and his favorite Rachmaninov piece (and mine):