“Today, every inhabitant of this planet must contemplate the day when this planet may no longer be habitable. Every man, woman and child lives under a nuclear sword of Damocles, hanging by the slenderest of threads, capable of being cut at any moment by accident or miscalculation or by madness. The weapons of war must be abolished before they abolish us. It is therefore our intention to challenge the Soviet Union, not to an arms race, but to a peace race – to advance together step by step, stage by stage, until general and complete disarmament has been achieved.” – JFK in his speech to the United Nations in 1961 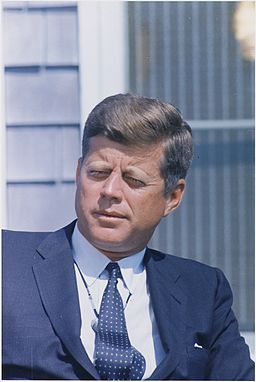 Just our opinion here but JFK’s Commencement Address at American University, June 10, 1963 was one of the greatest speeches given on peace, and tragically, one that led those in the military industrial complex to consider him a dangerous threat to their interests and intentions

JFK was struck down in service to his country, working toward nuclear disarmament and for “a world safe for diversity,” stating further, “For, in the final analysis, our most basic common link is that we all inhabit this small planet. We all breathe the same air. We all cherish our children’s futures. And we are all mortal.”.

We honor him, and all those who died in service to our country.

You can watch the speech here or if you prefer, read the full speech here

“I have, therefore, chosen this time and place to discuss a topic on which ignorance too often abounds and the truth too rarely perceived – and that is the most important topic on earth: peace.

What kind of a peace do I mean and what kind of a peace do we seek? Not a Pax Americana enforced on the world by American weapons of war. Not the peace of the grave or the security of the slave. I am talking about genuine peace – the kind of peace that makes life on earth worth living – the kind that enables men and nations to grow and to hope and to build a better life for their children – not merely peace for Americans but peace for all men and women – not merely peace in our time but peace in all time.

Today the expenditure of billions of dollars every year on weapons acquired for the purpose of making sure we never need them is essential to the keeping of peace. But surely the acquisition of such idle stockpiles – which can only destroy and never create – is not the only, much less the most efficient, means of assuring peace.

I speak of peace, therefore, as the necessary rational end of rational men. I realize the pursuit of peace is not as dramatic as the pursuit of war – and frequently the words of the pursuers fall on deaf ears. But we have no more urgent task.

Some say that it is useless to speak of peace or world law or world disarmament – and that it will be useless until the leaders of the Soviet Union adopt a more enlightened attitude. I hope they do. I believe we can help them do it. But I also believe that we must re-examine our own attitudes – as individuals and as a Nation – for our attitude is as essential as theirs. And every graduate of this school, every thoughtful citizen who despairs of war and wishes to bring peace, should begin by looking inward – by examining his own attitude towards the possibilities of peace, towards the Soviet Union, towards the course of the Cold War and towards freedom and peace here at home.

First: examine our attitude towards peace itself. Too many of us think it is impossible. Too many think it is unreal. But that is a dangerous, defeatist belief. It leads to the conclusion that war is inevitable – that mankind is doomed – that we are gripped by forces we cannot control.

We need not accept that view. Our problems are man-made – therefore, they can be solved by man. And man can be as big as he wants. No problem of human destiny is beyond human beings. Man‘s reason and spirit have often solved the seemingly unsolvable – and we believe they can do it again.

I am not referring to the absolute, infinite concept of universal peace and good will of which some fantasies and fanatics dream. I do not deny the value of hopes and dreams but we merely invite discouragement and incredulity by making that our only and immediate goal.

Let us focus instead on a more practical, more attainable peace – based not on a sudden revolution in human nature but on a gradual evolution in human institutions – on a series of concrete actions and effective agreements which are in the interest of all concerned. There is no single, simple key to this peace – no grand or magic formula to be adopted by one or two powers. Genuine peace must be the product of many nations, the sum of many acts. It must be dynamic, not static, changing to meet the challenge of each new generation. For peace is a process – a way of solving problems.

With such a peace, there will still be quarrels and conflicting interests, as there are within families and nations. World peace, like community peace, does not require that each man love his neighbor – it requires only that they live together in mutual tolerance, submitting their disputes to a just and peaceful settlement. And history teaches us that enmities between nations, as between individuals, do not last forever. However fixed our likes and dislikes may seem, the tide of time and events will often bring surprising changes in the relations between nations and neighbors.

So let us persevere. Peace need not be impracticable, and war need not be inevitable. By defining our goal more clearly, by making it seem more manageable and less remote, we can help all people to see it, to draw hope from it, and to move irresistibly towards it.

And Second: Let us re-examine our attitude toward the Soviet Union. It is discouraging to think that their leaders may actually believe what their propagandists write. It is discouraging to read a recent authoritative Soviet text on Military Strategy and find, on page after page, wholly baseless and incredible claims – such as the allegation that “American imperialist circles are preparing to unleash different types of war . . . that there is a very real threat of a preventative war being unleashed by American imperialists against the Soviet Union” . . . [and that] the political aims” – and I quote – “of the American imperialists are to enslave economically and politically the European and other capitalist countries . . . [and] to achieve world domination . . . by means of aggressive war.”

Truly, as it was written long ago: “The wicked flee when no man pursueth.” Yet it is sad to read these Soviet statements – to realize the extent of the gulf between us. But it is also a warning – a warning to the American people not to fall into the same trap as the Soviets, not to see only a distorted and desperate view of the other side, not to see conflict as inevitable, accommodation as impossible, and communication as nothing more than an exchange of threats.

No government or social system is so evil that its people must be considered as lacking in virtue. As Americans, we find communism profoundly repugnant as a negation of personal freedom and dignity. But we can still hail the Russian people for their many achievements – in science and space, in economic and industrial growth, in culture, in acts of courage.

Among the many traits the peoples of our two countries have in common, none is stronger than our mutual abhorrence of war. Almost unique among the major world powers, we have never been at war with each other. And no nation in the history of battle ever suffered more than the Soviet Union in the Second World War. At least 20 million lost their lives. Countless millions of homes and families were burned or sacked. A third of the nation’s territory, including two thirds of its industrial base, was turned into a wasteland – a loss equivalent to the destruction of this country east of Chicago.

Today, should total war ever break out again – no matter how – our two countries will be the primary target. It is an ironic but accurate fact that the two strongest powers are the two in the most danger of devastation. All we have built, all we have worked for, would be destroyed in the first 24 hours. And even in the Cold War, which brings burdens and dangers to so many countries, including this Nation’s closest allies – our two countries bear the heaviest burdens. For we are both devoting massive sums of money to weapons that could be better devoted to combat ignorance, poverty, and disease. We are both caught up in a vicious and dangerous cycle with suspicion on one side breeding suspicion on the other, and new weapons begetting counter-weapons.

In short, both the United States and its allies, and the Soviet Union and its allies, have a mutually deep interest in a just and genuine peace and in halting the arms race. Agreements to this end are in the interests of the Soviet Union as well as ours – and even the most hostile nations can be relied upon to accept and keep those treaty obligations, and only those treaty obligations, which are in their own interest.

So, let us not be blind to our differences – but let us also direct attention to our common interests and the means by which those differences can be resolved. And if we cannot end now our differences, at least we can help make the world safe for diversity. For, in the final analysis, our most basic common link is that we all inhabit this small planet. We all breathe the same air. We all cherish our children’s futures. And we are all mortal.”

Happy Memorial Day to all, and a “THANK YOU” to those who have served our country, in any and all capacities, with honor given to those whose lives have been lost in service to our country.

“As we express our gratitude, we must never forget that the highest appreciation is not to utter words, but to live by them” ~ John Fitzgerald Kennedy