By Olivia Murray – via americanthinker.com

February marked the reanimation of the perpetual conflict between Russia and Ukraine, and for the first time since then, Zelensky left his homeland, and yesterday, touched down in the heart of the political Swamp — shocker, he fit right in.

To set the stage, Mitch McConnell said on Tuesday:

Providing assistance for Ukrainians to defeat the Russians is the number one priority for the United States right now….

After flying in on an American aircraft, Zelensky delivered an address before Congress, telling the lawmakers that the American people hadn’t sacrificed enough for the war on the Russo-Ukraine border, and to think of the deficit spending and transfer of wealth as an investment in globalism rather than a handout to the elites. In Zelensky’s words per CNN:

“We have artillery, yes. Thank you. We have it. Is it enough? Honestly, not really.

Your money is not charity… It’s an investment in the global security and democracy that we handle in the most responsible way.”

But, wait, it gets worse. Congress gobbled it up, and the product was a wad of slimy phlegm — pardon my grotesqueness, but I was actually softer language than I’d prefer to use.

Oh, think the salivation stops there? Think again — listen to what David Frum at The Atlantic had to say, “He [Zelensky] came to thank the U.S. for supporting Ukraine. It is Americans who should thank him.” Are. You. Kidding. Me.

What the Western world is getting in return for its aid is a powerful recommitment to its own best self. We didn’t believe the Ukrainians could do it, in part because we didn’t believe we could do it. But they did. And so did we. And we look now at both Ukraine and ourselves in new ways.

The extremists and conspiracists and populists, the authoritarians and kleptocrats and theocrats who have all gained so much ascendancy in recent years, they do not speak for us. That small man in the olive-green jersey at the rostrum of the House of Representatives, he spoke for us. And the reception given to him today by the president and by Congress told the world that his words had been heard and received and understood by the great democracy-minded majority of Americans.

News flash: Congress neither speaks for me, nor do they “represent” me, despite their duty to do so. In fact, Congress does not speak for America, and they do not represent America, clearly. Its members are more dedicated to foreign interests and foreign investments than American ones — do those behaviors and allegiances not adequately define what it means to be a “traitor”?  I’d wager so.

And how did the Sniffer handle the visit from Beelzebub’s lackey?

Biden Nervous As Boss Drops By Unexpectedly – via babylonbee.com 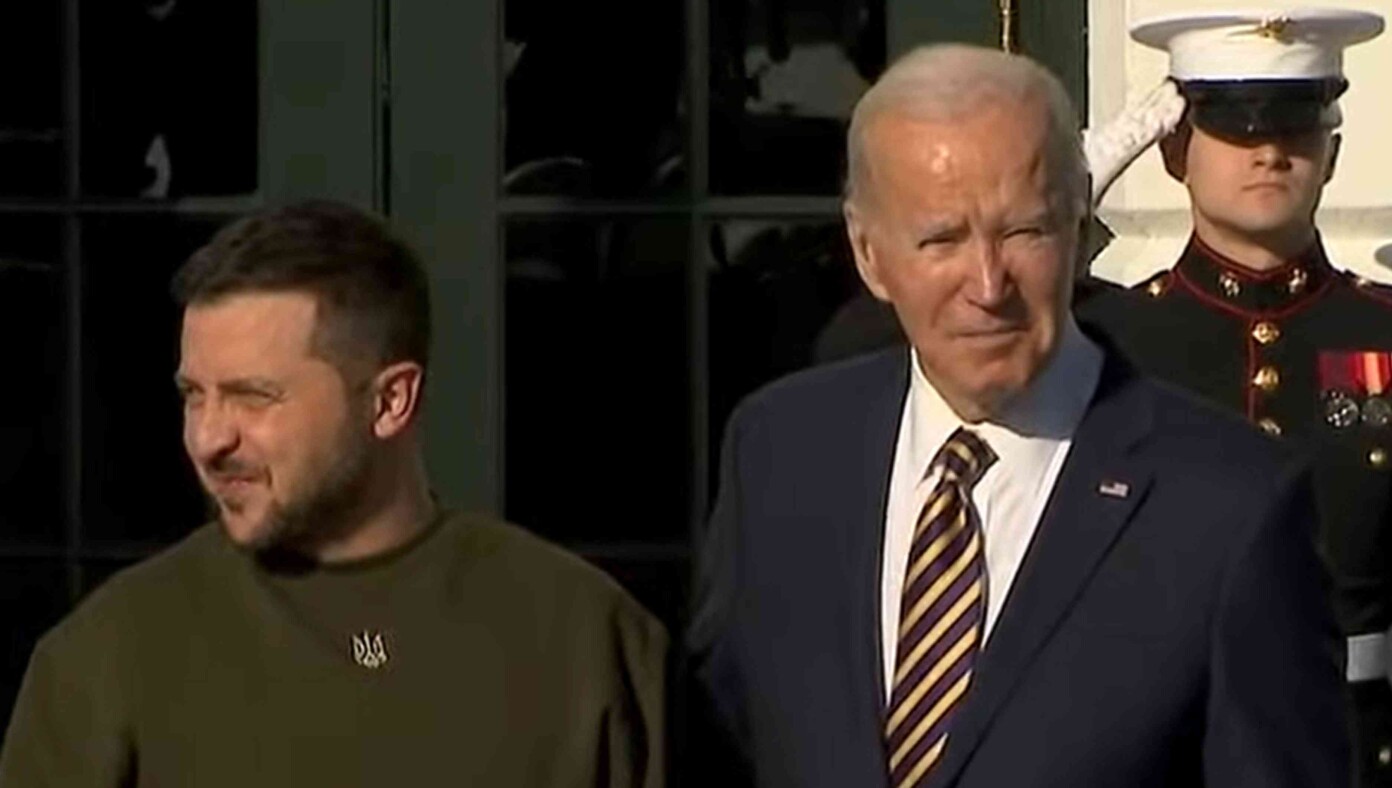 WASHINGTON, D.C. — Sources say Biden is feeling nervous after an unexpected visit from his Ukrainian boss Volodymyr Zelensky just as the White House was wrapping things up to go home for the holidays.

“Oh no! Vocab Zikorsky is here! What am I supposed to be doing? Everybody, look busy!” said a frantic Biden to White House staff as Zelensky’s limo pulled up. “Darnit all!  Jill hates it when I have the boss over to dinner unannounced. Someone make some perogies or something. Do Ukrainians eat perogies?” Biden then sniffed a nearby staffer, something he always does when he gets nervous.

According to reports, Zelensky is stopping by Washington to check on the progress of the omnibus spending bill to ensure Biden gets it passed per his wishes. “Ukraine needs many more billions,” said Zelensky. “For President Biden’s sake, I pray he does not disappoint me.”

Several Republican congressmen also nervously approached the wartime leader in his dashing tactical green sweatshirt corduroys to promise him they would do everything possible to send many more billions to his country as soon as possible.

At publishing time, Zelensky had left the meeting early after a visibly anxious President Biden attempted to sniff him too — something considered a major social faux pas in Ukrainian culture.

Congress has assured the Ukrainian President that they will pass another $50 billion in spending by this Friday.

“The story so far: In the beginning the Universe was created. This has made a lot of people very angry and been widely regarded as a bad move.” ― Douglas Adams, The Restaurant at the End of the Universe

‘Skating’ – With the Jerry Granelli Trio

Before his death in July of 2021, Jerry Granelli was the last surviving member of the original group led by Vince Guaraldi that played the soundtrack for the iconic television broadcast “A Charlie Brown Christmas”. In this 2014 recording we see the Jerry Granelli trio performVince Guaraldi’s “Skating”. – The East Coast Music Hour with Bill Roach