In the house of suck, lives are flittered away by listening to morons, dickheads, dweebs, arseholes, and other shit shows masquerading as human beings.  No matter how many opportunities God or Mother Earth give to the unwashed to break free of the dainty daily bullshit from psychofuck’s, they continue to take pencil in hand and stick it repeatedly in their own eyes, thus blinded by imbeciles.

Behold!  NBC is resurrecting some old horseshit from when the scamdemic was rolling along, just in time for the holidays to keep the discord among families as juicy as possible.

NBC News Advises Parents To Keep Kids Away from “Unvaccinated Individuals” – via zerohedge.com

That’s right!  Make sure you keep Johnny away from all those nasty individuals who don’t have chemical goo running through their bodies.  We all know that health now comes from a needle that injects chemical toxins, so keep thy children away from any and all purebloods.

As winter looms, NBC News has some top tips for parents who are concerned about their children catching respiratory viruses… keep them away from the dirty unvaccinated people. 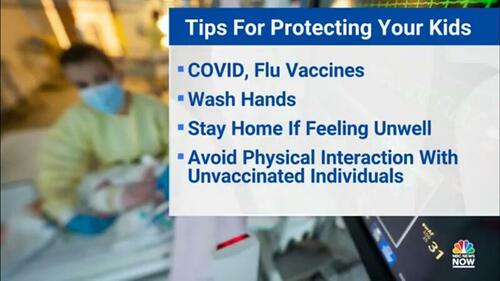 In a recent segment, an infographic advised that those who want to “protect” their children should wash hands, stay home, get vaccines and “avoid physical interaction with unvaccinated individuals.”

There is no actual evidence that unvaccinated individuals are more at risk of transmitting COVID or that the vaccines prevent the spread of the virus, but never mind that inconvenient distraction.

Produce nonsense, provide no evidence of assertions made, and all will merrily follow along. It’s worked for a very long while now.

The anchors then asked medical correspondent Dr. John Torres why more children are now so susceptible to RSV (respiratory syncytial virus), to which he responded “we don’t exactly know why.”

That is also not true, given that the CDC recently issued a report highlighting how a record number of children are now being hospitalised with common colds due to weakened immune systems.

Commenting on the findings, Dr Scott Roberts, a medical director at Yale University stated that lockdowns impacted the ability of children to build up immunity to common illnesses.

“There are two implications to this,” the doctor said, explaining “First, the gap gives time for the viruses to mutate even further to cause more severe disease.”

“And second, whatever immunity was built up to those viruses’ it will have waned making the immune response now much less potent,” Roberts added.

The doctor also noted that children, including his own son are now getting “constant infections.”

The CDC data is consistent with research by scientists at Yale who warned that it is not normal to see children with combinations of seven common viruses, including adenovirus, rhinovirus, respiratory syncytial virus (RSV), human metapneumovirus, influenza and parainfluenza, as well as COVID-19.

But whatever, keeping your kids safely locked away at home and away from the unvaccinated is the smart move.

Geez…getting ‘constant infections’.  What could it possibly be from?

But surely, as these shysters have been saying all along, the benefits of the chemical sludge far outweighs any risks of getting the jab…right?

Official Data confirms the Covid Vaccine is killing Children – Europe has suffered a 552% increase in Excess Deaths among Children ever since EMA first approved the Pfizer Jab for Kids – via expose-news.com

Before they first did this, deaths among children were well below expected levels. But ever since they have increased substantially.

At this point, it doesn’t matter how much one keeps sounding the alarm, for the cult is alive and well…and far reaching. In this post-fact world, stupidity, ignorance, arrogance and fear rule the day.  Overcoming it and bringing round your family and loved ones who might still believe deeply in the insanity, probably isn’t going to happen.

“You need to find people you can trust and make plans to help each other through the coming winter of death. Being a loner during a Fourth Turning is not ideal. If you can’t raise your own food, befriend a farmer. Make sure you are sufficiently armed and do not trust anyone from the government or beholden to the government for their living. Become physically and mentally prepared for what is coming. Reduce your taxable footprint and help starve the machine.

Keep everything in perspective and decide what is really important. Biden, Gates, Soros, and Schwab are nothing more than human flesh. They will die and meet their maker, just as we all will. Act as if the decisions and deeds you take in the next few years will determine how your children and their children will view your legacy. Will you make them proud or ashamed? The choice is yours. There is a foreboding chill in the air as the storm clouds gather.”  – Jim Quinn – Fourth Turning Winter of Death – via theburningplatform.com