The enhanced police state is turning tax accountants into the Gestapo. The IRS was forced to remove its job description after creating a buzz across the internet.

“As a Special Agent you will combine your accounting skills with law enforcement skills to investigate financial crimes,” the job advertisement stated. “No matter what the source, all income earned, both legal and illegal, has the potential of becoming involved in crimes which fall within the investigative jurisdiction of the IRS Criminal Investigation. Because of the expertise required to conduct these complex financial investigations, IRS Special Agents are considered the premier financial investigator for the Federal government.”

“Financial investigators for the Federal government” aka their muscle to collect as much money in taxes as they can. The description states that it does not matter whether the income was earned legally because it could still be used in crimes. Everyone is to be treated as a criminal until proven innocent now. 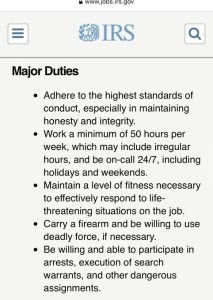 Above is a list of the major duties that agents will be responsible for completing. Why on Earth would an IRS agent face a “life-threatening” situation on the job? Worse yet, they are expecting agents to carry guns, and they must be willing to KILL “if necessary.” The United States is turning into a complete police state under the current administration. We were seen as vermin due to the virus, and they see us now as criminals for simply earning money and existing.

Sleepwalking into Our Own Demise – armstrongeconomics.com

“LaRCS” stands for “Live and Record Combined Stereo”, which means that on the left side you can hear a live performance, while on the right side the video clip/studio version. In this case you can enjoy “September” from the Earth Wind and Fire: on the right side the official music video clip, while on the left side a great live cover version from Leonid and Friends (2018, tempo adjusted).