Ever since the James Webb Space Telescope began sending incredible photos of the universe back to earth, scientists, clergy, and ordinary citizens have been awestruck at the sharpness and the detail of images from the $10 billion telescope.

The image garnered thousands of “likes” and retweets. “This level of detail,” Klein wrote. “A new world is revealed day after day.” 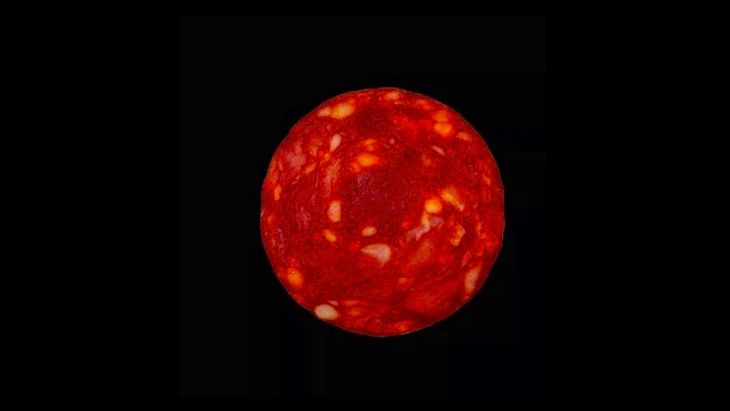 But what “world” was revealed? As it turns out, Klein had tweeted out a photo of a slice of sausage.

But a few days later, Klein revealed that the photo he tweeted was not the work of the world’s most powerful space telescope, as he had in fact tweeted a slice of chorizo sausage.

“According to contemporary cosmology, no object belonging to Spanish charcuterie exists anywhere but on Earth,” he said after apologising for tricking so many people.

“Like an idiot, I got screwed,” tweeted one French user. “Same,” replied another, “the source was so credible…”

No one should feel embarrassed about being tricked. Klein was trying to make a point about “fake news” and was more successful than he could have imagined.  (full article)

And speaking of ‘credible’ sources, check out some past and present nonsense from the farting media brigade: (via thegatewaypundit.com)

Remember…it’s all about your health:

Daily Mail: Expert warns that shoveling snow can be a deadly way to discover underlying cardiovascular conditions as straining the heart with physical activity could cause sudden death

Wales Online: Sweating more than usual and at night could be a sign of heart attack

Daily Mail: Entirely new kind of ‘highly reactive’ chemical is found in Earth’s atmosphere – and it could be triggering respiratory and heart diseases and contributing to global warming, scientists claim

New Scientist: Taller people may have a higher risk of nerve, skin and heart diseases

New Scientist: Solar storms may cause up to 5500 heart-related deaths in a given year

Express: Blood clots: How do you sleep? One position may increase the risk of deep vein thrombosis

Such an exhaustive list from these ‘health’ experts – what could have been left out?  Just one, but it’s kinda important:

Stop!  You blaspheme against the pharmaceutical conglomerate of psychofucks.  The chief lunatic of health has a few words for YOU:

Dr. Fauci: If you aren’t up-to-date on Covid vaccines and boosters, you’re ‘going to get into trouble’ – via cnbc.com

If you aren’t up-to-date on your Covid vaccines or booster shots, Dr. Anthony Fauci has a stark warning for you: Get those doses now, or prepare for a harsh Covid fall and winter.

Recorded Cases of Heart Disease Among Under 40 Years Old Eplodes 20,000% After Covid-19 Vaccines Roll Out

“How much more blatant does it have to get before people stop pretending that this isn’t what it is? Do the authorities have to literally put us in camps? How many more people have to die or be seriously injured by “vacccinations” they did not need but were forced to submit to? I’m not talking to the New Normals now, nor to the people who have been fighting this all along. I’m talking to the people who see what is happening, and are horrified by what is happening, but, for whatever reasons, have refused to speak out… and, yes, I know there are very good reasons.  Some of you have families to support, and careers to protect, and seriously, I get it. But how far does it have to go?  At what point do you feel you have to speak out regardless of the personal and professional consequences?” – CJ Hopkins – consentfactory.org