The bare minimum to get by is one of the many mantra’s the psychofuck’s use to operate each day.  Sadly, the bare minimum is all that is needed in this factory of pain to keep the unwashed miserable and unwilling to grow a pair, or even one, and drop a few anvils on the heads of these demons actions. 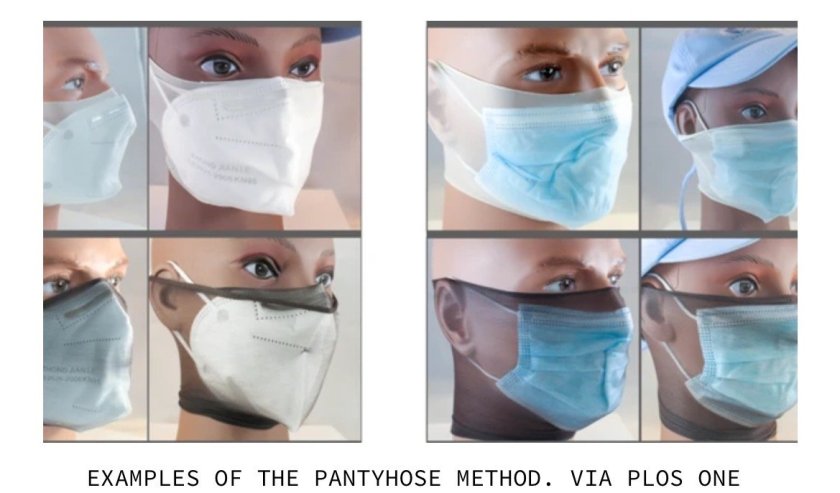 A ‘peer-reviewed’ study from researchers at the University of Cambridge tested different mask ‘hacks’ to find the best way to create a good seal around the face.

Their findings were released in PLoS One this week and the pantyhose hack won.

“The pantyhose caused high levels of discomfort as well as issues speaking and occasional obstruction of the eyes,” the researchers wrote.

A better seal around the edges of the masks means more protection from COVID-19, but most consumer-level surgical masks and KN95s leave gaps around the sides. The researchers tested seven different hacks that attempt to close the gaps, on surgical and KN95 masks:

All of these were better than nothing when tested by measuring concentrations of particles inside and around the mask. But the one that created the best seal was the pantyhose: they cut a section out of the thigh of some hose and yanked that over the wearer’s head and mask (except for one participant, who couldn’t get the hosiery over his head). The pressure of the stretchy fabric kept the mask on tight, but there was a catch: people really hated wearing it.

People won’t go for THIS…yeah?  Let’s see, it’s been almost 2 years since most of the world was told 2 weeks to flatten the curve and people are still munching on the droppings from these arseholes.

But brace yourself and try not to soil your undies…the Italian lawn jockey is mystified. Let’s check in:

Dr. Fauci Completely Mystified that Booster Shot Rates are Lagging…Maybe It’s All of His Lies? – via dcweekly.org

Dr. Anthony Fauci is mystified that the booster shot rate in the U.S. is lagging, telling reporters Wednesday, “I don’t have an easy explanation for that.”

“With regard to data — for Dr. Fauci or Dr. Walensky — what is your take on why the booster rate seems to be lagging?” Reuters’ Jeff Mason asked during Wednesday’s press conference with the White House COVID-19 Response Team. “Why would people who have decided to get vaccinated, the first and second doses, not be getting more boosters?”

Jeff Zients, the White House coronavirus response coordinator, before turning the question over to Fauci, explained that “about half” of all eligible Americans have actually received a booster shot.

“Well, Jeff, you know, I’m really not sure you’re asking a good question. It’s almost a psychological or sociological question,” he said before questioning individuals who have made the choice to skip the booster shot.

“Why would people who had enough understanding of the risk to go ahead and get the primary series — why we don’t have more getting the booster,” he asked. “I don’t have an easy explanation for that.”

Sure – folks may be waking up to this gerbil’s lies, but they’re also catching wind of the real tragedies folks are suffering from as a result of injecting these shysters’ chemical goo into their bodies:

The U.S. Government’s Vaccine Adverse Events Reporting System (VAERS) released more data into the database maintained by the CDC and FDA today (1/28/2022), and there are now 1,071,856 reports of deaths and injuries following COVID-19 “vaccines.” (Source.)

By way of contrast, prior to December of 2020 when the COVID-19 vaccines were issued emergency use authorization (EUA), there were a total of 915,813 reports of deaths and injuries following all FDA-approved vaccines for the previous 31 years. (Source.)

Therefore, following the first complete year of injecting the population with experimental COVID-19 injections that were given emergency use authorization, deaths and injuries have increased 3,250% compared to deaths and injuries reported following all FDA-approved vaccines for the previous 31 years. – via healthimpactnews.com

And hey shitposting writer, it’s always doom and gloom with your offerings.  How about a bit of a laugh to end with?

Okay…first, you have to know about “Triumph, the Insult Comic Dog”, then at least have some idea of ‘Star Wars’ nerds, and then not be bothered with a bit of off-colored humor.  Here ya go: