And each day, though an unwashed innocent goes to bed at night thinking things can’t get worse, the next 24 hour cycle of fuckery is fast upon them.

Ali Soufan has gone from having truckers fighting for delivery jobs to him fighting to find anyone willing to deliver produce from the U.S. to Calgary.

The manager of Freestone Produce Inc. said an already strained supply chain is now being choked off by health orders requiring American truck drivers to be fully vaccinated and their non-inoculated Canadian counterparts to produce a negative PCR test and quarantine when they cross the border.

“For the product to be right there and not being able to touch it, we’ve never seen it before in the 12 years that we’ve been open,” he said. “The U.S. is full of product and we just can’t get it up here.”

The produce warehouse in Northeast Calgary routinely received two or three trucks a day to restock their shelves. Now, when they are attempting to import 80 to 90 per cent of their stock from the U.S., they are lucky to get one truck every two or three days.

This has led to shortages in staples their customers have been accustomed to relying on them for like grapes, strawberries and citrus. When they can get some of those items, the price has gone up exponentially . Grapes that used to be 99 cents a pound are now running $4.99 a pound.

With the trucks Freestone can secure, they are focusing on vegetable deliveries, and the cost of those trucks has also skyrocketed. The average truck out of California pre-pandemic cost Freestone $6,000 to 7,000, now it’s costing them $9,000 to 11,000. (read more)

Wow!  Evidently, eating is now considered non-essential, or at least the eating of fruits and vegetables. And thank God these government nitwits won’t allow unvaccinated, unclean untouchables to enter their pristine petri dish of frenzied psychofuckery. 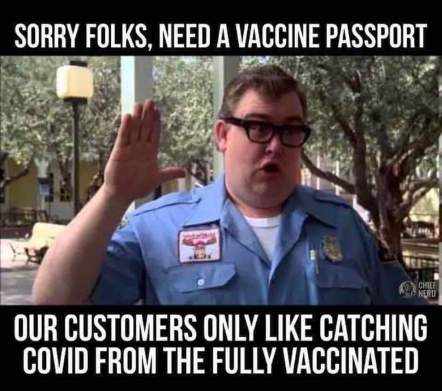 Evidently, anvils have to be dropped on people’s heads to understand how they’ve been played, and I haven’t seen an anvil in years.

A landmark Israeli trial is expected to show that four shots of vaccine didn’t stop infection by the Omicron variant, according to a study official.

While the extra dose — of either Pfizer or Moderna vaccine — seemed to have some effect, rates of infection in the study were not substantially different to those who had three doses of Pfizer, the study official said.

Gili Regev-Yochay, a lead investigator on the study, told reporters that “the vaccine is excellent against the Alpha and Delta,” but the study found that “for Omicron, it’s not good enough,” The Times of Israel reported Monday evening.

We’ve lost our ability to first recognize freaks, and then worst of all, to continue to allow them screw us over, day after day after day.

“In keeping silent about evil, in burying it so deep within us that no sign of it appears on the surface, we are implanting it, and it will rise up a thousand fold in the future. When we neither punish nor reproach evildoers, we are not simply protecting their trivial old age, we are thereby ripping the foundations of justice from beneath new generations.”
― Aleksandr I. Solzhenitsyn, The Gulag Archipelago 1918–1956