The fuckery never ends from the government and corporate assclowns:

Bezos Leads Parade of 400 Private Jets to COP26 with $65M Gulfstream As Greata Accuses Leaders Of Betrayal – via zerohedge.com

Hypocrisy and hot air over Glasgow Airport as the 2021 UN Climate Change Conference, also known as COP26, attracts 400 private jets carrying world leaders and business executives from around the world. We want readers to visualize these political and financial elites flying in on their jet fuel-guzzling private planes as they urge the rest of us for the next week to eat less meat, drive less, and fly less.

(If you think these arseholes are anything more than demon shit, let me know – I have a bridge to sell you.)

Bezos’ appearance comes on the heels of celebrating Bill Gates’ 66th birthday on a nearly $3 million per week superyacht off the coast of Turkey – reaching the boat by helicopter.

The Amazon founder met with Prince Charles to discuss climate change, tweeting “The Prince of Wales has been involved in fighting climate change and protecting our beautiful world far longer than most. We had a chance to discuss these important issues on the eve of #COP26 — looking for solutions to heal our world, and how the @BezosEarthFund can help”

(Serious shitfuckery from this lizard) 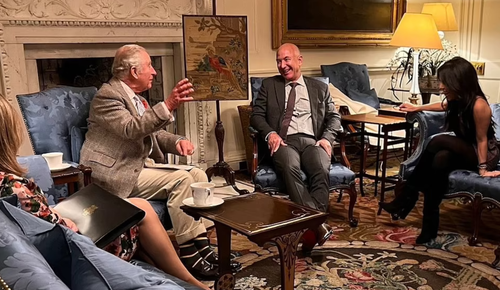 (They smile, laugh and guffaw now – I wonder what expressions will be on their faces in the hereafter, given an eternal view by the gods, of the decay and nonsense they heaped upon innocents, and the souls here on the terra firma that they have so little regard for, along with the lives of the innocents they could give a shit about.)

Meanwhile, President Joe Biden is expected to create 2.2 million pounds of carbon to reach the summit – as he’s bringing four planes, the Marine One helicopter, and an enormous motorcade.

Don’t these people have Skype?

Their hypocrisy is on full display. Yet so many cannot see it…or refuse to see it.

It’s not about climate change these arseholes clamor on about, it’s not about the health these dickheads with their medical mandates, ….it’s about you bending the knee to these absolute filth of human souls, and obeying every insane order, mandate, suggestion or guide they dream up.

And adhering to their jive….it does have its consequences.  Not for them, but for you and I:

The medical dictatorship rules on, wiping out thousands of years of civilization, and all respect for individual liberty and for the rule of law.

Get the jab and eat less meat, drive less and stay in your homes…why? Because these dickheads say so. Got it?

Need some courage or backbone to stand up to these tyrants? Maybe a bit of Beethoven, from his Ninth symphony, will inspire it: