Nothing screams ‘health’, love of your fellow human, compassion and tolerance like the following…yeah?

A law was passed on August 16 authorizing increased restrictions against people who do not have a valid Opportunity Pass. The restrictions were phased in over several weeks after passage of the law. All measures are in full effect since September 13.

This is in Lithuania  – the full article can be read here.  (Covid Pass in Lithuania and throughout Europe: How recent vaccine mandate laws have upended my family’s life)

It’s a lengthy article – 16 minutes read time – but well worth the ‘effort’.

More from the article: 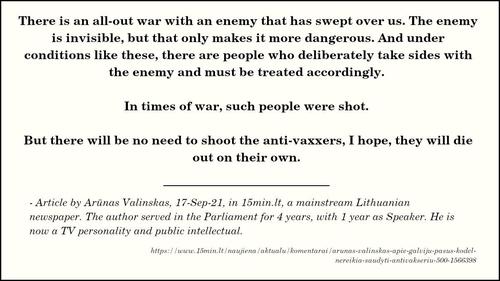 Those wishing death upon anyone for exercising their right to decide what form of experimental chemical goo is, or isn’t injected into their bodies are demon droppings – full stop.  They’d turn their own mother into the authorities if it benefitted them or amplified their virtue signaling of the accepted government narrative.

Imagine wishing death to the poked – how long would it be tolerated?

Yet these merchants of death, openly wish for the death of other humans, because they won’t succumb to a medical procedure they don’t want.  Those propagating this fuckery are not humans….they are psychofucks.

Meanwhile, in another part of the poked world:

Dr. Eli David
@DrEliDavid
After vaccinating over 85% of its population, Singapore  finally flattened the curve, but along the wrong axis:

There are no dangers with their vials of experimental chemical goo, right? The injection is as harmless as fluffy clouds…yeah?

Roll the dice and see….

The Killer in the Bloodstream: the “Spike Protein” – via unzreview.com

“From the beginning Covid has been a conspiracy against health and life. Covid is a profit-making agenda and an agenda for increasing arbitrary government power over people. There should be massive law suits and massive arrests of those who block effective Covid cures and impose a deadly vaccine.”

The Spike Protein is a “uniquely dangerous” transmembrane fusion protein that is an integral part of the SARS-CoV-2 virus. “The S protein plays a crucial role in penetrating host cells and initiating infection.” It also damages the cells in the lining of the blood vessel walls which leads to blood clots, bleeding, massive inflammation and death.

To say that the spike protein is merely “dangerous”, is a vast understatement. It is a potentially-lethal pathogen that has already killed tens of thousands of people.

So, why did the vaccine manufacturers settle on the spike protein as an antigen that would induce an immune response in the body?

That’s the million-dollar question, after all, for all practical purposes, the spike protein is a poison. We know that now due to research that was conducted at the Salk Institute. Here’s a summary of what they found:

“Salk researchers and collaborators show how the protein damages cells, confirming COVID-19 as a primarily vascular disease…. SARS-CoV-2 virus damages and attacks the vascular system (aka–The circulatory system) on a cellular level… scientists studying other coronaviruses have long suspected that the spike protein contributed to damaging vascular endothelial cells, but this is the first time the process has been documented….

… the spike protein alone was enough to cause disease. Tissue samples showed inflammation in endothelial cells lining the pulmonary artery walls. The team then replicated this process in the lab, exposing healthy endothelial cells (which line arteries) to the spike protein. They showed that the spike protein damaged the cells by binding ACE2…“If you remove the replicating capabilities of the virus, it still has a major damaging effect on the vascular cells, simply by virtue of its ability to bind to this ACE2 receptor, the S protein receptor, now famous thanks to COVID.” (“COVID-19 Is a Vascular Disease: Coronavirus’ Spike Protein Attacks Vascular System on a Cellular Level”, scitechdaily.com – (read more)

Once all have been poked with these shysters’ concoction of horseshit, there will no longer be anyone left to say … anything, about anything.

The ‘unthinkable’ has been dumped upon the unwashed by the corporate media and government arsehoels..it is verboten, a crime, a hideous affront, to believe in someone just the way they are.