He’s a young gent, not in the US, but an Ireland ice hockey star.

His resignation in protest over vaccine passports is well worth the read.

Courage of convictions, courage to stand against government tyrants, to speak out for him and his family – it’s rare, yet so needed.

Niall McEvoy is an ice hockey player who has represented Ireland for the past thirteen years. He was a key member of the squad that won the silver medal at the 2017 Development Cup in Andorra.

This morning, Niall emailed his team mates and the coaches of the Irish National Ice Hockey team to tender his resignation. In the emotional email, Niall said that he “can no longer represent a country that has approved of the discrimination and segregation between vaccinated people and unvaccinated people.” 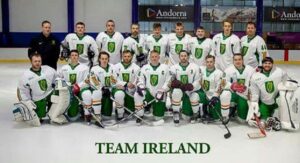 He went on to say that, “I will not accept or consent to a “Vaccine passport”/digital passport, nor will I use a Qr code/track and trace system that allows this system to be implemented. This allows for total government control over the citizens of Ireland and akins us to cattle.”

Niall reached out to me this morning. He gave me permission to read his email to the national team on The Richie Allen Show. He also gave his consent for the email to be circulated, so long as it isn’t taken out of context and is reprinted in full.

Here is Niall’s email in full. I haven’t edited it.

Firstly I would like to apologise for not making last nights zoom call. I had fallen asleep after work, due to being at a protest for the majority of Wednesday night(July 14th 2021) in our nations capital.

We live in exceptional times.

I will take this opportunity to make you aware that I am immediately resigning from the Senior Men’s, Irish National Ice Hockey Team. If you bare with me, I will explain in detail as to why.

Let me start by stating this is in no way an attack on the Irish Ice Hockey Association, our managers or coaches for the countless hours they put into this squad and organising trips abroad, along with the tireless work of attempting to open an ice rink in the Republic of Ireland.

Instead this is directly attributed to the recent bill passed in the Irish government on Wednesday night/Thursday morning. I have attached the PDF, should you be inclined to browse it.

Ireland is now, officially, a Medical apartheid/Fascist State in line with the wider global control grid. The group of people acting as the Irish Government has been allowed, by our citizens, Gardaí  and the Irish defence forces to erode our rights given to us under the Irish constitution, the UN declaration of human rights and have broken the Nuremberg code. Our inalienable rights have also been eroded over the past 16 months, which are given to us by God, not government. (which is still recognised as the highest authority whether you believe in God or not)
(I have attached links below to these rights)

I can no longer represent a country that has approved of the discrimination and segregation between vaccinated people and unvaccinated people. I will not be manipulated into taking a STILL experimental injection, with no licence, no long term safety or data, no legal liability for damages and only emergency use authorisation and zero proof of effectiveness/immunity. I will not risk my athletic abilities and normal functioning body. There are other well known and safe therapies available, like Ivermectin(peer reviewed/Nobel prize), which may be used before it comes to the need of any injection. I do not need to be a doctor to recognise this. The evidence is over whelming if you care to look.

I will not accept or consent to a “Vaccine passport”/digital passport, nor will I use a Qr code/track and trace system that allows this system to be implemented. This allows for total government control over the citizens of Ireland and akins us to cattle.

We now live in a two tier society.

As of July 15th 2021, my fiancée, my children, myself and many others became 2nd class citizens in Ireland. We can no longer do the same thing that 1st class citizens can do. We can no longer travel internationally without subjecting ourselves to medical intervention /testing(with a test not designed to detect illness) when we are not sick. (There are many studies showing that asymptomatic transmission is virtually non-existent).

The recent bill, gives the current ‘minister for health’ – Stephen Donnelly the power to decide what constitutes an indoor risk, including sports and leisure facilities (ice/Inline). He may decide on Monday it is a criminal offence to play indoor sport whereas on Tuesday it may be okay. This is extremely dangerous to our democracy. These laws are unjust and thus giving me the right not to follow them. Unfortunately the police forces in Ireland have allowed and supported the government by refusing to protect the people of Ireland from draconian lawmakers. I can no long trust those sworn by oath to protect us.

Many of you have seen the recent images of France as people protest en mass in regards to president macrons recent address which will make entering supermarkets, schools and working illegal unless vaccinated. This is an EU country. If they can do it in France they will do it here. They previously did it in Nazi Germany.

Now at this point you must ask yourself, if this is such an effective treatment, why are they rewarding those who take it with their rights back and punishing those who refuse, many of whom, including myself are at little risk from this supposed disease and its supposed variants (reminder, vaccines protect me. Not you)?

At this time, I feel obliged to take a stand on the matter even if you believe its not a big deal. I must, morally position myself Inline with what is right and just, and I hope you can understand where I am coming from.

I hope that these laws will be reversed and that the criminals in government and the Gardaí who enforce such laws(and all covid restrictions) will be held accountable at some point in the future, as were those in the Nuremberg trials. (images attached for reference)

Until then, I once again state I will not represent a country who criminalises people who choose to live differently than the majority.

Hopefully in the near future I can tryout and rejoin this team that I have dedicated ALL of my adult life to, made life longs friends, which has also given me so much joy and happiness throughout the years.

I wanted to do this now instead of just before the upcoming development cup in October 2021, Germany, so that the coaches can fill the spot and train you guys, in your lines, in advance.

Ps* this is in no way a disregard to anyone who has been directly affected by an illness with the symptoms like the disease known as Covid-19. The government however has now directly impacted my children’s lives, unlike the illness, and I will not stand for this.

With all of my regards,
Niall McEvoy
Dundalk
Republic of Ireland
16th July 2021

“In keeping silent about evil, in burying it so deep within us that no sign of it appears on the surface, we are implanting it, and it will rise up a thousand fold in the future. When we neither punish nor reproach evildoers, we are not simply protecting their trivial old age, we are thereby ripping the foundations of justice from beneath new generations.” – Aleksandr I. Solzhenitsyn, The Gulag Archipelago 1918–1956