What would a Friday night be here in the land of “I don’t care, I’m doing what I’m told anyway”, without a visit from Middle Earth’s favorite gollum, especially with Halloween right around the corner:

Dr. Fauci says even with a vaccine, masks and social distancing will continue until 2022 – via theblaze.com

Dr. Anthony Fauci, one of America’s leading public health experts, said recently that even after a coronavirus vaccine is developed, Americans will likely need to continue wearing masks and practicing social distancing for quite some time.
In fact, people should expect to wear masks and social distance through the end of 2021 and into 2022, he said.
Fauci, who directs the National Institute of Allergy and Infectious Diseases, made the comments during a Zoom meeting with faculty and students at Thomas Jefferson University in Philadelphia last week.
During the meeting, in which Fauci also predicted any forthcoming vaccine will only be 70% effective, he noted that masks and social distancing will be needed because it will take significant time before herd immunity is achieved.

Ah yes, the new narrative is underway, as the dickheads, once again, move the goalposts.

Fuck the vaccines, they’re only 70% effective – this coming from the asses of God knows whom. We need to listen to unelected dickheads whose only talent is heaping misery upon the masses.

“It’s not going to be the way it was with polio and measles, where you get a vaccine, case closed, it’s done,” he added. “It’s going to be public-health measures that linger for months and months.”

Fauci also warned Americans against thinking a vaccine will be a “knockout punch” for the virus, noting that vaccines are often less effective against respiratory viruses. 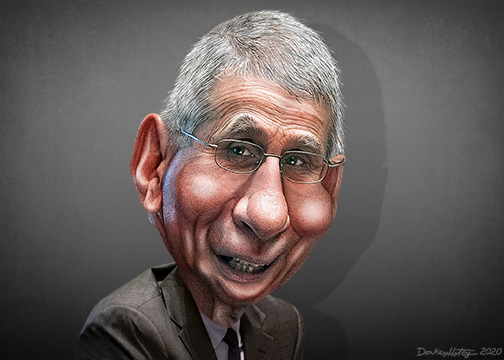 Oh…okay.  Let’s continue to listen to this demon from Middle Earth.

In the land of the apathetic, piles of excrement are hurled upon the unwashed in the form of lies, bullshit, fuckery, propaganda, and cringe-worthy mental bombs upon the few remaining grey cells left in their brains.

The lolcow’s know the failure must continue to believe, and so they enjoy their tank into the nether world.

There are other medical doctors, those not approved by the government and media hyena’s, speaking out at the insanity of the gollum’s shitfuckery:

Frontline Doctors Return to Washington D.C. to Dispel COVID Myths and to Offer Truth and Hope – via healthimpactnews.com

They gave another Press Conference on the steps of the Supreme Court, which again is being heavily censored although many copies are now on the Internet.

Hello everybody. I am Dr. Simone Gold. I’m a board certified emergency physician and the founder of America’s Frontline Doctors.

And we’ve come back with some of my group for the second White Coat Summit.

We’re here to speak to America just like we did on July 27th.

At that time we brought the American people truth and hope and optimism.

And we’re here to give you more truth and more reasons to be optimistic and to not live in fear.

There continues to be a great deal of disinformation and outright censorship.

Since our Summit, the censorship unfortunately has gotten worse.

Because of that, we’ve established a website: America’s Frontline Doctors, where you can find the truth, where the truth is not censored.

Today, we’re going to bring you information about masks, about lockdowns, about most importantly, early treatment.

Reasons to be optimistic. We’re going to dispel the myths.

I want to start with masks. And I start with this because there is a legal crisis, a Constitutional crisis, that we’re not recognizing. And it is, to some extent, personified by the forced, mandated wearing of masks.

Let’s not tip toe around the great big elephant in the room. The facts are actually not in dispute.

Masks are completely irrelevant in blocking the SARS-COV2 virus.

Prior to March 2020 there were no scientific journals that asserted that masks could keep out a virus.

Consider what our Emperor Fauci said when asked if he’s sure that masks work.

Now remember, he is not new to the game. This has been his life’s work for decades.

Dr. Fauci said, “When you’re in the middle of an outbreak, wearing a mask might make people feel better. And it might even block a droplet.

But it isn’t providing the perfect protection that people think it is, and often there are unintended consequences.”

What the New England Journal of Medicine, a premier medical journal, had to say about masks. The following: “It is clear that masks serve symbolic roles. Masks are lucky charms that may help increase health care workers’ perceived sense of safety and well-being.

Although such reactions may not be strictly logical, we’re all subject to fear and anxiety, especially during times of crisis.

Expanded masking protocols greatest contribution may be to reduce the transmission of anxiety.”

That is per the New England Journal of Medicine.

I will put it plainly to you, my fellow Americans, you have been lied to by the media.

And John F. Kennedy pointed out, “It does not matter if the propaganda had a sinister purpose. The great enemy of the truth is very often not the lie, but the myth persistent, persuasive, and unrealistic.

Sadly, the masses drool over the idea of being skinned and sent to the taxidermists for their ultimate annihilation.

Inhaling the mustard gas from these cement heads is what the partying and celebration of all that is insane, is all about, right?

“It is by no means an irrational fancy that, in a future existence, we shall look upon what we think our present existence, as a dream.” ― Edgar Allan Poe

When all this fuckery rolls out to each individual, how long will we continue to bend over for these demons insertions?

Even though it’s a performance under the social distancing bullshit, it is still quite lovely:

Yet notice the conductor walks out on the stage with his mask of shame covering his piehole, and then, once he ascends to the podium, it’s discarded. Once again, the mighty cornholio knows how and when it can infect:

What absolute bullshit we continue to believe!

Or, a condensed trueism of the modern era:

“Everybody Wants To Rule The World” – Tears for Fears

And with the recent passing of my dear brother, 57 years old, none of us rule this world – and believing that we do…absolute nonsense.

And yet, we continue to believe.

UNFATHOMABLY, we continue to listen to, and for the most part, obey their demonic putridness, and the kicker is, that we’ve been conned into believing it is what is right and proper.