No, you’re not in a time warp, it’s still 2020, and it’s still another 4 months or so until cold weather sets in here in the Northern Hemisphere that will do what the cornholio and government shysters haven’t been able to fully accomplish…keep people in their cribs.

But presently, we’re stuck with dealing with Gong Show participants who hold government jobs, and some who are even mayors and governors, or dickheads who never graduated from college, have no medical expertise but whom the unwashed are serenaded into believing via corporate media shysters, throwing out their shitf**kery for the unwashed to not only bend the knee toward, but also bend over and display their arses for the latest daily reaming from these cement-heads.

We detailed earlier that a number of US universities will enforce mandatory COVID-19 tests for all students wishing to return to campus through the Fall semester — with some lately announcing that this will be at a rate of two nasal swabs per week — which is a policy, no doubt uncomfortable for those having to endure such “routine” swabs, also appearing among companies for on-site personnel.

And in many parts of the country, cities and counties currently have mask laws requiring them in all public spaces. Given that over the past months the race has been on to develop and fast-track a coronavirus vaccine, the logical next step will be that students and employees provide proof they’ve received the vaccine before returning to work or school. Naturally, the idea of fast-tracking this process also amid a deeply politically charged climate has people concerned. And they should be, if Bill Gates’ latest appearance on CBS is any indicator of where things stand.

British veteran journalist Neil Clark had this reaction to the Bill Gates interview, which came days ago: When anyone tries to gaslight you by calling you a ‘crank’, a ‘tin-foil hat conspiracy theorist’ or ‘Flat Earther’ for having perfectly legitimate & sensible concerns over a rushed through ‘Coronavirus’ vaccine & its side effects, just send them this.

Even CBS pressures Bill Gates on the topic that almost everyone had side effects. He doesn’t seem to care.
pic.twitter.com/2SiBmowJo3

Even the mainstream media correspondent giving the interview appeared momentarily exasperated and incredulous that Bill Gates shrugged off credible reports of side effects as ultimately no big deal. When the anchor pressed him again on the safety of the vaccine, his answer appeared to be simply, trust us. Gates was asked:

Side effects from the Moderna vaccine sound concerning… we looked. After the second dose at least 80% of participants experienced a systemic side effect, ranging from severe chills to fevers. So are these vaccines safe?

“The FDA, not being pressured, will look hard at that,” Gates said, addressing the issue of possible side effects. “The FDA is the gold standard of regulators, and their current guidance on this — if they stick with that — is very very appropriate.” – via zerohedge.com – read more

It’s hard to say when the unwashed consciously choose to believe depravity, voodoo science, incredible bullshit and schemes to further enrich billionaires was the way to go. 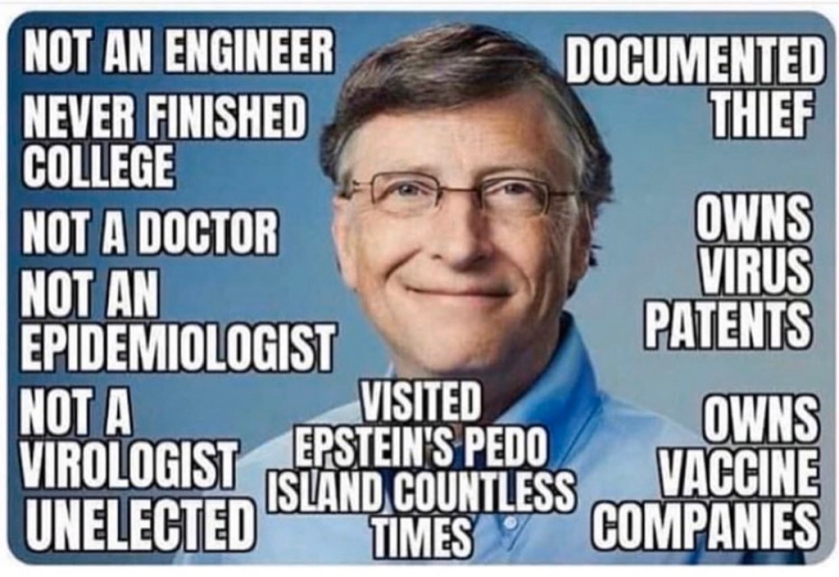 The more often a stupidity is repeated, the more it gets the appearance of wisdom. – Voltaire