The Trump administration, riding on a beautiful wave of false hope that Americans and the rest of the world would quietly consume another dish of their dainty bullshit that General Qassem Soleimani was plotting attacks against four U.S. embassies, appears to be nothing more than just another sad episode of Washington’s continued fecal incontinence that makes for foreign policy where generals of sovereign nations can be “eliminated” whenever the mood hits.

“The administration didn’t present evidence to Congress regarding even one embassy,” Amash tweeted.

“And they have never presented evidence of imminence—a necessary condition to act without congressional approval—with respect to any of this,” he added, referencing Trump administration officials’ justification for launching an airstrike that killed Soleimani. – via theHill.com

Evidence? Since when does Washington need evidence to do anything? Remember the ‘weapons of mass destruction’ shitf**kery; just one of a slew of Washington’s mother load of lies it dumps upon a gullible and mostly apathetic public who willingly abide by this monsters bile.

But at least Americans are safer now…at least this is what the lunatic with orange hair tells us, as he sends another 3,000 troops to the Middle East after the Soleimani killing, and chimes in with another bucket full of guano:

The Fake News Media and their Democrat Partners are working hard to determine whether or not the future attack by terrorist Soleimani was “imminent” or not, & was my team in agreement. The answer to both is a strong YES., but it doesn’t really matter because of his horrible past!

Ah yes, a horrible past where he was in Baghdad to meet with Iraq’s Prime Minister about a Saudi request for dialogue to relieve tensions in the region—not, as the U.S. has claimed, to plan attacks against American forces.

But the hairpiece is right, nothing really matters and no f**ks are given by the Washington machine of death and destruction when it comes to more killings.

And those 3,000 troops are desperately needed to maintain the number of U.S. bases surrounding Iran.  I mean, check out the map below…the frickin’ chutzpah of Iran to stick its country in the middle of U.S. bases! 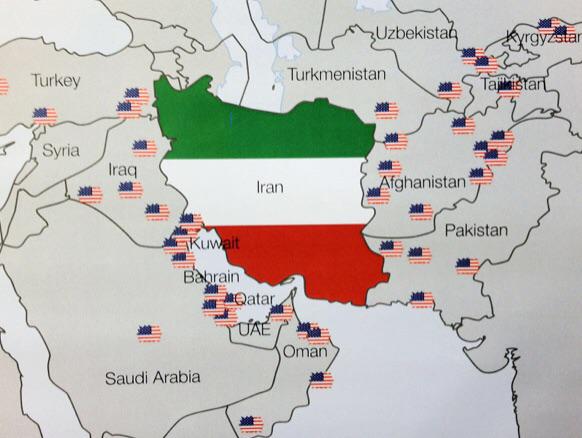 The money to maintain all this shyte…it’s cool, for there are no needs unmet here in the land of lollipops, candy canes, genetically modified food, chemical goo falling from the skies, continued weather warfare carried out against the innocents  (or here, or here) and a medical system that does great business as long as you stay sick. All of this is enough to make one puke, but most Americans lost their ability to vomit long, long ago, and thus are happy to sit, comatose-like, in a tub of suck.

Just remember all this is done for you safety, just as the new pilot program the U.S. has begun for collecting DNA samples of people detained at border crossings – with the data then sent to the FBI. And that includes U.S. citizens. All for your safety, of course.

“Who are the oppressors? The few: the king, the capitalist, and a handful of other overseers and superintendents. Who are the oppressed? The many: the nations of the earth; the valuable personages; the workers; they that make the bread that the soft-handed and idle eat.” – Mark Twain

***
Tonight’s musical offering:
The Beatles – “The Long and Winding Road”

Photo by Chanan Greenblatt on Unsplash