Theo stood next to Andre even now, with the cold, the wind, and sleet turning to snow, stinging their faces.  Andre held up his sign at the corner of the busy city street, not eager to make eye contact with drivers stopped at the light, though few took notice of them. 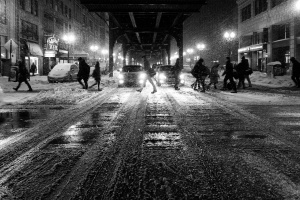 That it had come to this was splintering his mind a thousand different ways. But there was no other way.  All funds and favors had been spent.  Relatives and friends, those few left who gave him a second thought, were tapped out. The only reason he kept going, being reduced to the ﬁnal humiliation of making a sign begging for small change, was his friend standing next to him.  His friend of the past ten years, always there, always supportive.

“Hang in there, Theo,” he managed through the biting cold. “Just another half hour or so.”

Car after car went by.  A few of the more hard-hearted types would throw spare change at them.  One or two of the more charitable types would roll down their window and hand Andre, or sometimes Theo, a paper bill, usually of the one dollar denomination.  This didn’t happen very often during their daily stint at the corner.  Four hours was all they could muster in weather conditions such as this.  Four hours and they’d be drenched, chilled to the bone and slowly walk away together, with probably only a few dollars to spend between themselves. Some days their begging was enough to ﬁnd cheap shelter for the night, most times not and they would head off to a secluded section of the city park where they could make-shift a shelter among a thicket of evergreens for the night.

Mercifully, the charity of others was more abundant than normal today, maybe because of the cold but probably more because of Theo.  If drivers took even a few seconds to notice of the two of them and saw in Theo what Andre saw in him, they’d give them their throw away money.  Andre was hoping for enough to afford him and his friend a room at a motel for the outcast and forgotten, a welcomed treat after such a day as this.

Andre looked at his red and weathered hands as he counted the days take; hands that use to play the piano and afforded a comfortable living.  Classically trained. Studied in Europe. The severing of his ring and pinkie ﬁngers on his right hand in a car accident took his livelihood from him.  He tried other things, teaching music, which he was horrible at.  He tried ofﬁce work and found that he hadn’t the slightest disposition toward interacting civilly with other ofﬁce types.  With each attempt to ﬁt in somewhere, he found he ﬁt in nowhere.  Friends and family chided Andre many times that if he’d let others care for Theo, he might not be so handicapped.  Theo was the only friend left who hadn’t turned on him, and though Theo was unable to work due to traits acquired at birth, Andre couldn’t imagine life without his friend.  Andre knew it was him who would be handicapped without Theo, and decided long ago never to leave his friend.  And so they faced it together, ﬁnding a busy inner city thoroughfare not claimed by others, who, like the two of them, had run their path bone- dry, and begged for a living.

They rounded the corner on their walk to their room for the night and, as was customary, stopped in at the neighborhood record store for warmth and a few words with the help there who knew both of them.  Andre knelt down beside his friend before they went into the store and looked into his eyes.  Theo lifted one of his front paws for Andre to take in his hand.  Andre gently rubbed it to warm it, and did the same to his other paws. Theo’s tail wagged – his eyes never wavered from Andre – forever his friend, forever his companion.

**This work (not including photos) is licensed under:  http://creativecommons.org/licenses/by-nd/4.0/**