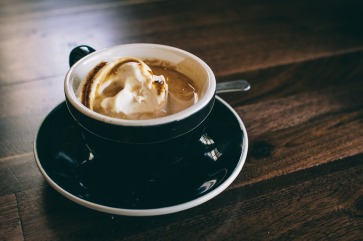 She arrives at the neighborhood cafe, always at 3:30, almost every afternoon. A half cup of coffee is poured for her into a off-white porcelain cup with matching saucer underneath. Always ordering the same accompaniment, employees at the cafe know the young woman’s next request and have a small cup of vanilla ice cream ready in the freezer.

“Thank you,” she says softly.

She carefully transfers the items from tray to table, sits down, removes her white kid gloves and begins creating her variation of an affogato. Her long and slender fingers gracefully direct the movement of coffee cup, cream dispenser and sugar cubes. A generous amount of cream and one sugar cube is added to the half cup of coffee. She stirs slowly – always three gentle stirs. Setting the spoon down quietly, she takes her first sip of coffee. Her full lips with perfectly applied red lipstick leave an imprint on the cup. A momentary pause, she then gathers a half spoonful of coffee and pours it over the ice cream. Letting it settle for a few seconds, she dips her spoon in the ice cream, capturing the perfect mix of ice cream and coffee. The cold delicacy in her mouth, she lets it stay there a few seconds, savoring the delight.

The chill from the brisk Autumn afternoon wind is subdued by the warmth of the cafe. She removes her mustard colored wool overcoat with stand collar and folds it neatly over the chair next to her. Her navy blue, wool Breton hat is left on, keeping her soft, but unruly brunette curls somewhat in place. Wearing a red cashmere sweater that she bargained for at the local thrift store, she compliments it with a strand of small, white pearls her mother passed on to her. Finishing her accoutrement is a navy blue, pleated skirt, falling gracefully at her knees, revealing matching blue tights that give way to blue suede pumps. With her affinity towards 1940’s fashion tastefully presented, she smiles ever so slightly.

Taking the cap off the black fountain pen that her grandmother had given her years ago, she places it next to the coffee cup and opens her leather-bound journal. A few words written, she sets the pen down and pours another spoonful of coffee over the ice cream, taking a casual glance at the other patrons seated about. She hopes he is there in his usual corner spot. She has never spoken with him but always feels comforted when the elderly gentleman is present. She smiles when she catches sight of him, with his loyal dog laying at his feet.

She had friends, albeit only a few, all living far away.   Fairly new to the city, and being disadvantaged, as she called it, dinner companions or someone to walk the downtown streets with was a little more of a formidable task for her than as it was for others. Hearing aids in both ears – her voice, which she hated when she could hear it, combined with being introverted, self-conscious of her disability, and her aversion to almost anything modern didn’t lend itself well to befriending others. Still, she tried – awkwardly most of the time. If people only understood she could hear and converse in ways most never imagined, they might be more receptive. As the days passed by, she found that to be a diminishing hope.

‘Alone and purposely avoided,’ she starts writing but then crosses out.   The fountain pen leaks ever so slightly onto her index finger.   She quickly locates the small, pink handkerchief in her overcoat pocket and rubs her finger clean. Another spoonful of the affogato enjoyed, the pestering thought she can’t get rid of interrupts her appetite. Get with the times and join in, she thinks. She looks around, nearly every person in the cafe is transfixed, their heads buried, staring at a glowing screen. Loneliness was dreadful but participating in what she considered the mundane of modern distractions was something she took pride in avoiding. Hand-held wireless devices and all their accompanying addictions were foreign to her. Correspondence, courtesies and the ordinary communication tasks one must do everyday weren’t to be accomplished with trivial acronyms, thoughts shorter than 140 characters or haphazard research findings presented to one by a robotic entity. She preferred the hand written letter, her daily journal entries, phone calls made while comfortably at home, research accomplished by turning pages of a book. She thought her generations’ love affair of the inanimate as an unhampered addiction to an avalanche of media triteness that impeded independent thinking. In her mind, there was much more freedom and pleasure in the leisure, having solitude where one could think and do without being manipulated toward a consensus. No cable, a computer only for her work and watching classic movies, and books – too many for the small apartment she had but not nearly enough for her cravings was her household.

As she swallowed the last spoonful of ice cream from the cup, she let out a sigh. It wasn’t the pleasant sigh from a satisfied palate or the hollow sigh from a long day, it was from sadness that another day had been spent without conversation.

The elderly gentleman in the corner of the cafe heard the sigh. Seventy years old, with thick, white hair that was probably too long for his years, he spent time at the cafe listening and observing.   The woman’s voice is what first caught his attention the first time he started coming to the cafe a couple of weeks ago. Undertones quietly spoken as she read her latest journal entries, a “thank you” here and there – it was a voice that gave away her youth, one that modulated perfectly between the high and low. It was soothing and comforting to him, reminding him of a better time long ago.

With the passing of his wife five years ago, he lived alone. His children lived in other cities and were busy with life. They they left him with a helper, Ignatius, a Labrador Retriever. Ignatius proved to be more concerned with his well-being than any of his children. He found the arrangement of Ignatius giving care, love and attentiveness to him that his children should have quite satisfactory.

Each day he arrived at the cafe a half hour or so before she did. He hoped she would have a friend along side her. No friends, no acquaintances. People kept their distance. He knew why.   A harsh and cruel world. The child with a disability who sits alone eating lunch in the school cafeteria day after day, he imagined it never really ended with adulthood. Her quiet whispers, the nearly imperceivable slurp of her coffee, such little peculiarities would be tolerated, to a point. An effort to converse, well, that was probably a whole other matter. He pulled out his own notebook. Not a journal as hers was, but a small pad that he kept in his suit pocket to remind him that he could still see well enough to write.

She looked up from her writing to see if the elderly gentleman was still there. He was writing, appearing to struggle a bit with each pen stroke. Alone every day, she thought. Purposely avoided, just like she was.

As she continued to converse with her journal, she was given a start when she caught sight of the gentleman’s Lab passing by, and then noticed the folded piece of paper that had been left on her table.   She turned to see more, but only saw the tail of the Lab going out the front door. She opened the note: ‘If you might consider sharing an affogato with an old, nearly blind man, I will be here tomorrow, along with my buddy, Ignatius.’

Dealing with the unexpected wasn’t her forte. Yet she wasn’t puzzled, bewildered or otherwise perplexed.   She smiled. The feeling of being alone had vanished.