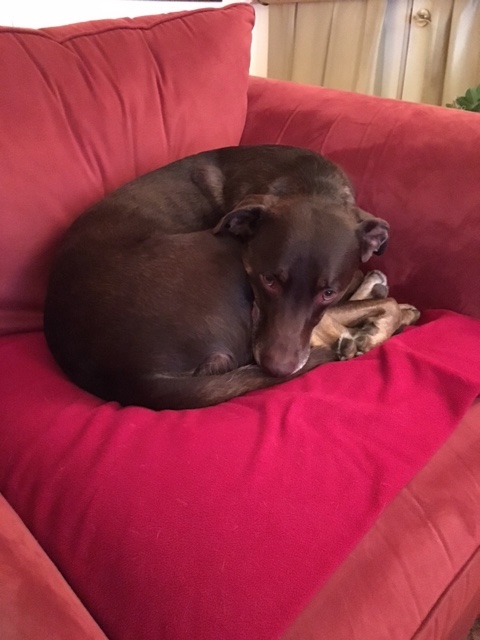 When you’re the big boss dog of the universe, and you take a break from sniffing other arse’s or licking yourself (just because you can) and take a gander outside the universe’s window, looking down upon this particular mess that is called Earth, you come to understand…’yeah, it’s about time to pull the plug on this poop.’

There might be a few odd and misbehaved canine’s splattered about, but for the most part, they just want to play, have fun, and look out for each other.  Just go to a dog park for evidence on that.

The lovable canines watch out over home and hearth, go spasmodic with joy when you, whom they love, come home. As Henry, the editor-in-chief of the mostly junk this writer posts each day that he could give a flip about – he offers his favorite toy to you when you come visiting the asylum.

But who knows the minute, the hour or day when the plug is pulled on this poop – it probably should have happened ages ago – evidently the big boss dogs of the universe were preoccupied with having too much fun to have noticed the destruction happening here.

Humans have displayed an unbelievably evil talent for heaping destruction upon one another throughout their time on the planet, with no f**ks given to those suffering their insane offerings.

Wars, propaganda, omission of the truth, lying, cheating, fraud – the uncanny knack of elevating shysters and f**ktards as leaders century after century – and the modern day  malaise of offering feel-good nonsense when your species is about to off itself – the dogs tilt their head, look you in the eyes, and say…’what the f**k’?

Electromagnetic goo, pharmaceutical poisonings, genetically modified everything, 24/7/365 surveillance, AI, a lying media and government – dogs instinctively run from such evil, from such madness, from such destruction.  Humans, on the other hand, dive deeply into it, and after thousand of years of witnessing the carnage heaped upon humankind by other humans or non-humans, continue to be pleasured by taking it up the arse with the f**kery offered them.

The cute and stupid meme, the insipid ‘look at this video of another human being dumb, cute, stupid or just weird’, the insanity of reading the Twitter dump of the day and even more incredulous – thinking that the blue or red, or any color in between party will stop the insanity – the dogs laugh at us yet are also saddened.

Some humans are “awake”.  Most are completely awash in ignorance…and happily so.

But then, things happen.  Illnesses experienced from the poisons of the era, humans in white lab coats only capable of offering more goo that never cures, and mostly harms; political demons that offer solutions that only line their pocket books with more money while human innocents suffer unimaginable torments; demon corporations that fire a woman for spending an extra hour with a dying relative – how much more of this shyte will humans put up with?

And so, the caring canines in the universe outside us concludes – there is little hope, and so, we will stop the poop that humans dump upon themselves and all others – we will stop the march toward endless evil.

The dogs realize and understand that all the current insanity is a spiritual war – a spiritual war that humans have been too dumbed downed to understand – by the fluoride in the water they drink; by GMO introduced into the food they eat; by electromagnetic goo in the form of wireless f**kery that most willingly hold in their hands each and every day.

The battle is nearly over. Most humans haven’t a clue of who they are, or of what they could become, and could give a shyte about either – happily led into the abyss by shit-holes of humans, celebrating entrance into Gehenna with a meme they send out to their loved ones grandly displaying their ignorance, taking their leave here and entering the nether regions there.

As the boss dogs of the universe…or the committee of dolphins who started all this…or the gods above who’ve had enough of it all, finally pull the plug on the poop – the incredulously insouciant souls here on planet Earth will look to the heavens and ask, why?

And the dogs will look at us, with their head titled as they do and ask us…what the f**k were you looking at each and every day?